There are a lot of opinions out there on how best to do the strip milling. Some say to saw, then plane. Some say to saw only because you'll remove saw marks down the road whilst sanding. Some say  to pre-scarph boards and rip strips at full length and yet others say to scarph afterward. Some say to use bead-and-cove the edges of each strip for quick hull assembly, others say that rolling bevels (or no bevel at all) is perfectly fine.

It comes down to a tradeoff between beauty and time savings. I don't care much about the former and care a lot about the latter, so picking the exact method was pretty easy for me. First decision was to forget about scarphs. I'm not selling this boat and the look of mismatched butt-jointed strips actually appeals to me quite a bit. Structurally, butts vs. scarphs is irrelevant. It's also likely I'll paint the outside of the hull (at least the bottom) anyway, so time-consuming scarphs are off the table. Second decision was to go with a rolling bevel for edge-to-edge strip joining. This guy

Laughing Loon - on rolling bevels
gives a pretty convincing argument for using rolling bevels instead of bead and cove (unless you have a pro setup), and I'm confident with a block plane so I guess I'll do it that way.

This meant I could just use my clear 4/4 x 6 x 8ft rough-cut cedar stock, purchased from Devon Lumber in Fredericton, and mill it to 1/4" x ~3/4" without worrying about any extra steps. This was the only board dimension they have for clear cedar, and you have to wait awhile (they only run the cedar mill periodically) but as of right now I know of no other local suppliers that will do small orders.

On to milling the strips!

I didn't really know what my equipment was capable of (accuracy-wise), so I figured I'd try a ripping a few strips and see if I could get away with no planing. For sawdust-producing implements I have a crappy old skil table saw, with a thin-kerf blade and a homemade extension table: 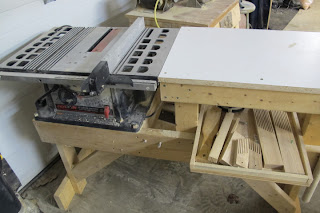 ...and a really crappy shaky old band saw that I also made a base for (super safe with no belt guard): 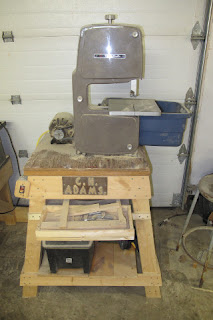 ...and a 2nd hand thickness planer that seems to work pretty well even though the thickness reading is meaningless and the blades are a titch dull: 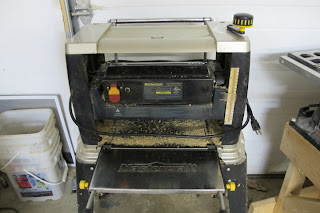 ...and some more homemade items that include a sturdy table (at the height of the table saw) and an 8' straight-edge / ripping fence. These two clamp to the table saw to make a large outfeed + extended fence assembly. 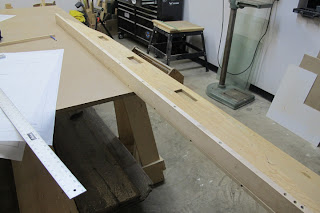 As you can see, my power tools mostly are not very nice. After making just a few rips on the table saw I realized there was no way in hell I'd be able to consistently cut 1/4" strips straight up. I set the fence to 5/16" instead and decided to plane the strips afterward. This produced a much nicer result: 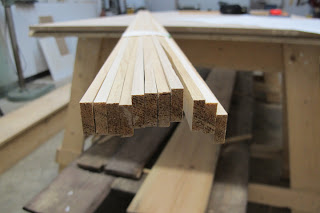 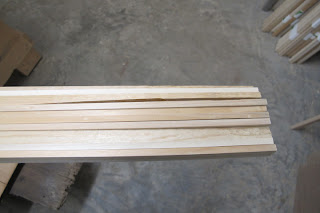 I did ruin a few strips being hasty with the planer. If you try to put 2 strips through at a time, the thicker of the two (even if it is not very thick) will lift the feed roller off the strip surface off the thinner one. This means the thinner strip stalls mid-feed and chatters against the blade, making a terrible-looking wavy surface. Solution of course is to feed them through 1 at a time. This makes planing an agonizingly slow process, but on balance it evens out because sanding will take far less time

Total time spent milling strips and figuring out the best setup for my equipment was 12 hours. Next time it would take half that at most...but there's definitely a learning curve.

There are a lot of cautions in the literature RE how long strip milling takes. Keep in mind I did the bare minimum and it still took a long time. If you're doing bead and cove yourself then expect to spend days and days at it. I just say this because if you're like me and are doing this on a vanishingly-small sliver of spare time, and you want pretty-looking full length bead-and-cove strips, just buy them. Better that than to get discouraged.
Posted by Unknown at 15:10