Well I am glad I took a few seconds to ask on the woodenboat forum about my alignment issue. Peerie Maa, a member there suggested I pound nails into the tops of my molds and use those as alignment guides. I did this and in the process shifted my strongback around a bit to position it better in the workshop. I realized all of a sudden my centreline had hardly any of the wonk it had before...and the only thing that changed between now and the day I stretched the string is that I shifted the strongback to a new spot on the floor.

Curious now, I busted out the level and checked at several points along the strongback. Sure enough, the beam had a twist! I didn't think of it as a possibility since the strongback is very rigid, but such a beam would be poor at supporting a torsional load. Considering the eccentric weight of the molds (and the considerable weight of the beam itself) I should have foreseen issues with twist.

My sawhorses are too high, and I can't be arsed to make legs just now. A temporary solution was to slip 2x4 scraps under the strongback all the way along and level them using shims. This took the twist out of the strongback and I was able to reposition the 3 molds that were still obviously out of alignment.

Figure 34: 2x4 scraps and cedar shims to level the strongback. 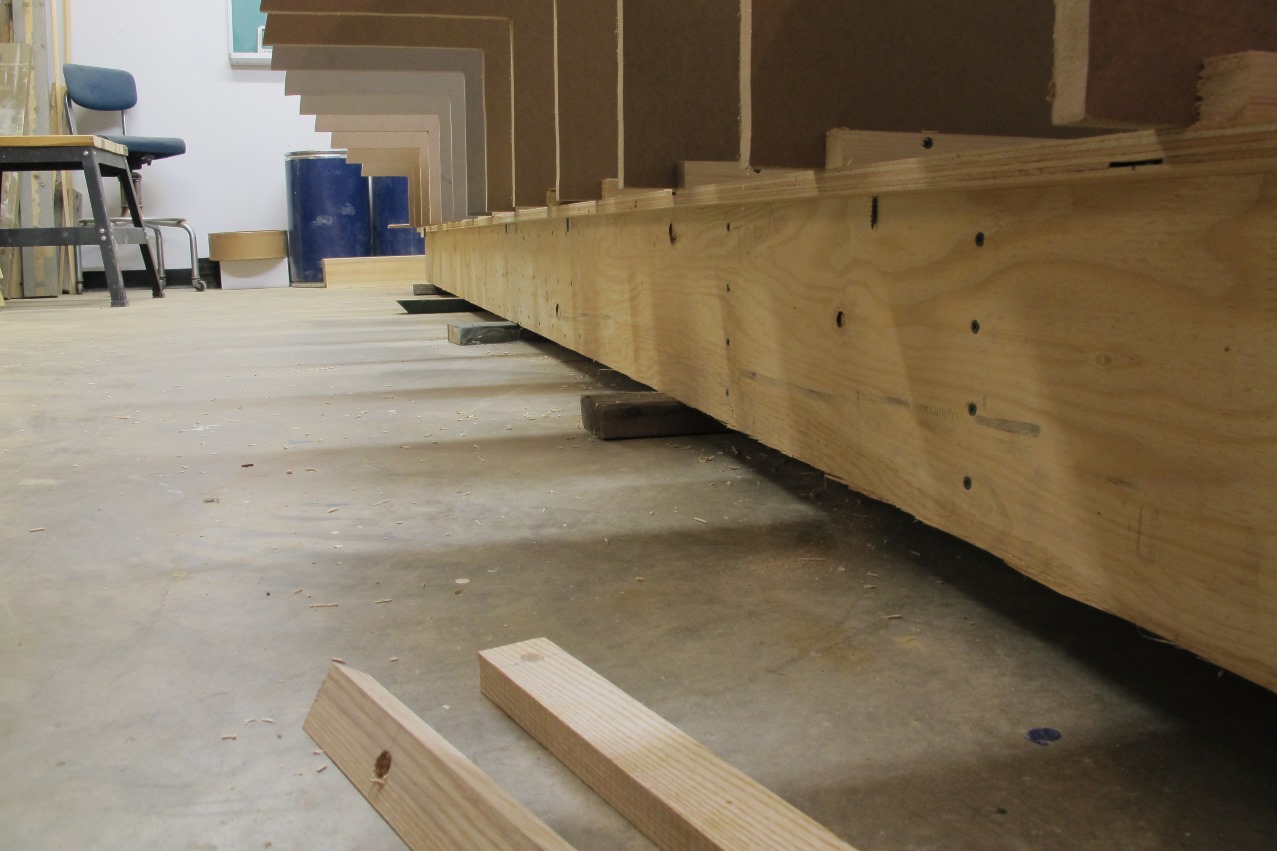 I believe I will make legs before I start planking...'cause fuck doing all that work on my knees. If things get twisty during installation of the legs, I'll just have to re-level the strongback and I can be confident that the keel alignment will remain pretty close.

This process is really cool. I loaded in all my white ash stem laminates at once (on advice from Ted Benson in Canoecraft) and fired up the lobster boiler. Once it hit a rolling boil, I whipped off the aluminum lid and stuck the steam box in its place. 10 seconds later and steam was pouring out of everywhere - some at the seams but mostly out of the end with the holes. This is good from what I read. You want the steam to fill the box completely from source to outlet, and judging by the amount of steam coming out the end, I definitely ticked that box.

Steaming time was 15 minutes for 1/4 inch laminates, based on the general rule of 1hr of steaming per inch thickness of wood.

No clue who keeps linking here from homemadetools, but whatever. More
pictures and details on construction of the steambox on Post XII if you're
interested. 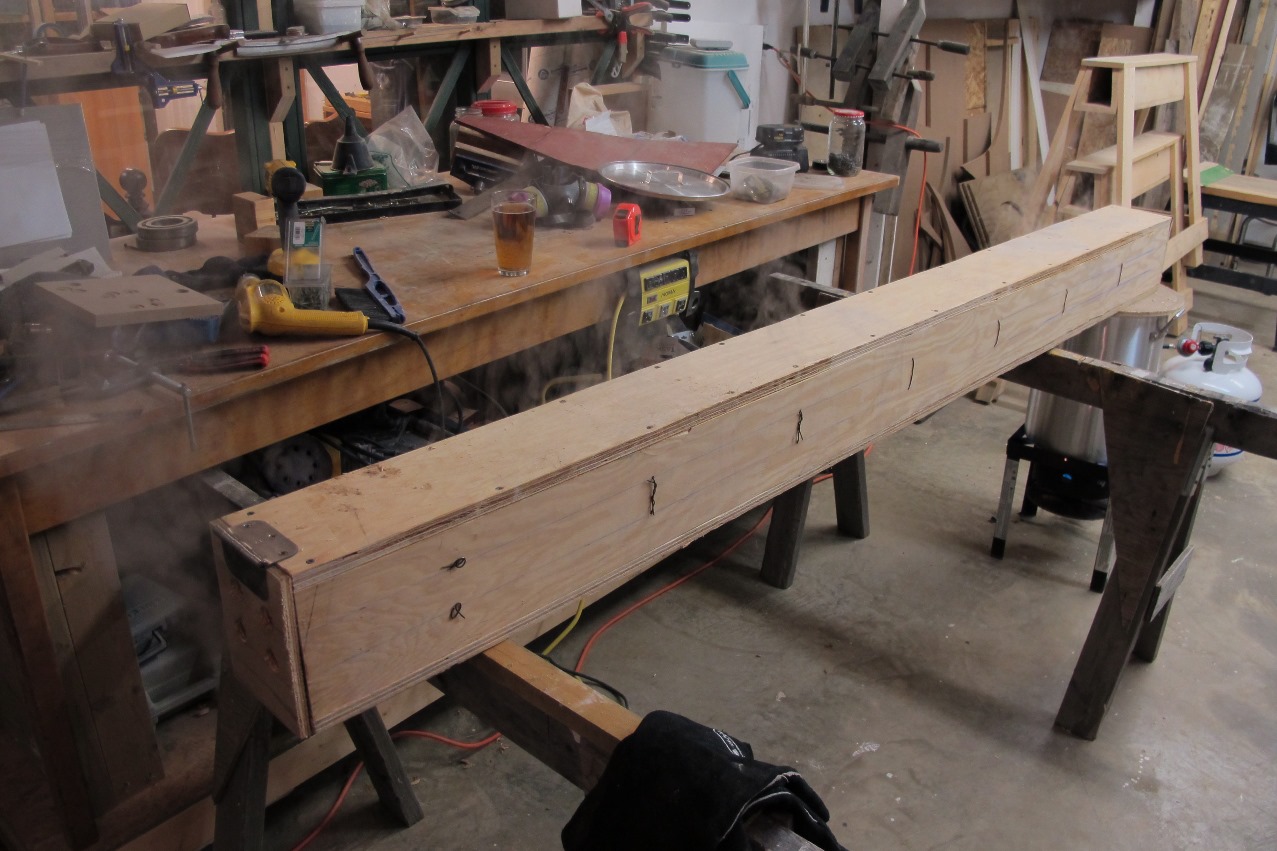 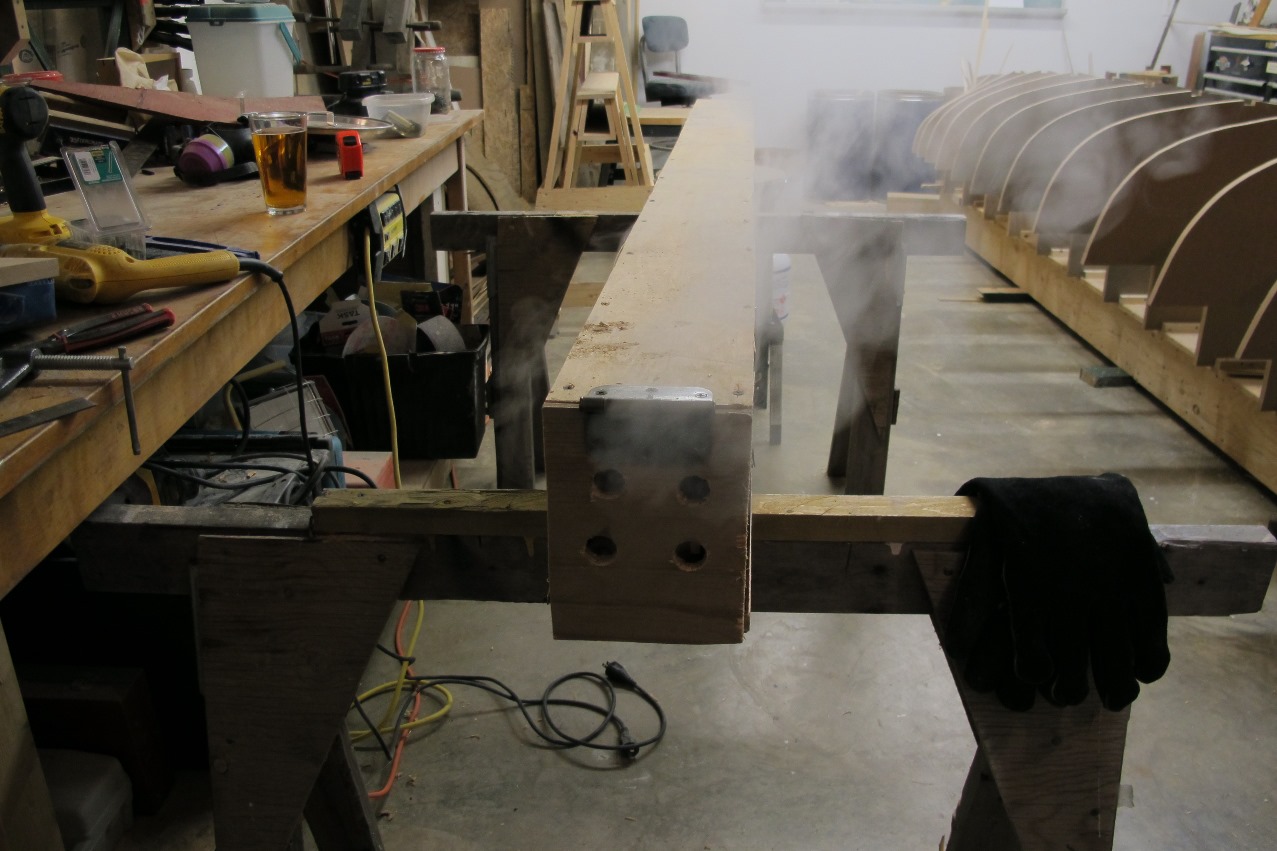 Then came the bending, which was really scary. I tried dry-bending a piece just part-way around the curve of the stem and it broke like twig, so I was surprised that I met with such steamy success on the first go-round.

The critical time is the first 45 seconds after you pull the sticks out of the oven. They must be bent within that window, or the lignin in the wood will harden up and you're shit outta luck. My wife and I coordinated it so she was ready to install the 2 topmost clamps the second I got them on the mold. As the second clamp was being screwed home, I started bending around the tight radius and with surprisingly little effort, the things flexed right around! A couple more clamps finished the job and we were done in probably 45 seconds to a minute.

Figure 37: Completed bend. Ready for lamination once it cools and dries. 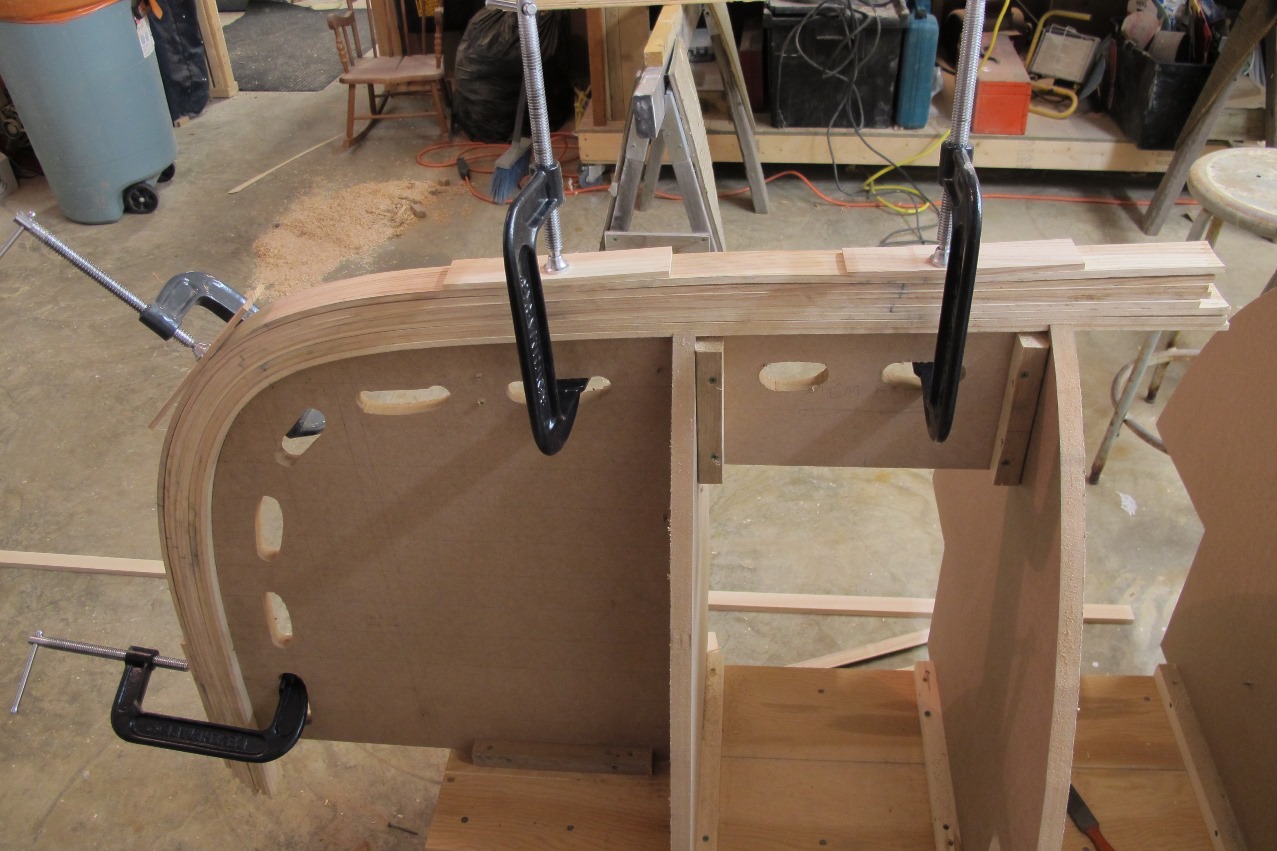 I then treated myself to a beer to dilute the adrenaline and quell the anxiety. 2 more days to wait until I can glue it up - that's what the books say anyway. Glue will not displace water, so it's important to allow enough time for the moisture to come back out. Hopefully I'll get a few minutes to do my glue-up over the weekend.
Posted by Unknown at 20:19