It's been awhile since the last post I know...summer is here and there never is enough time to work on projects like this. The last session in the shop took care of the last nagging issues with the mold and the transom. First off, I planed away most of that strip I added in the previous session. I left a millimetre or so because it seemed to help with the fairness, but in general my adjustments to the mold met with failure. I checked on the woodenboat.com forums and the advice I received was not to worry overmuch about minor unfairness. Full-size traceable plans were purchased and I was careful with my mold setup, so there probably is not too much to worry about. Of course, this is where my addition of 1' length might come back to bite me - the plans were originally faired for a 16' boat - but by all reports whitehalls are especially amenable to the lengthening method I used (described back in Post II I think).

Figure 51: Filler strip added to mold #8, which I ended up planing down to pretty much nothing. 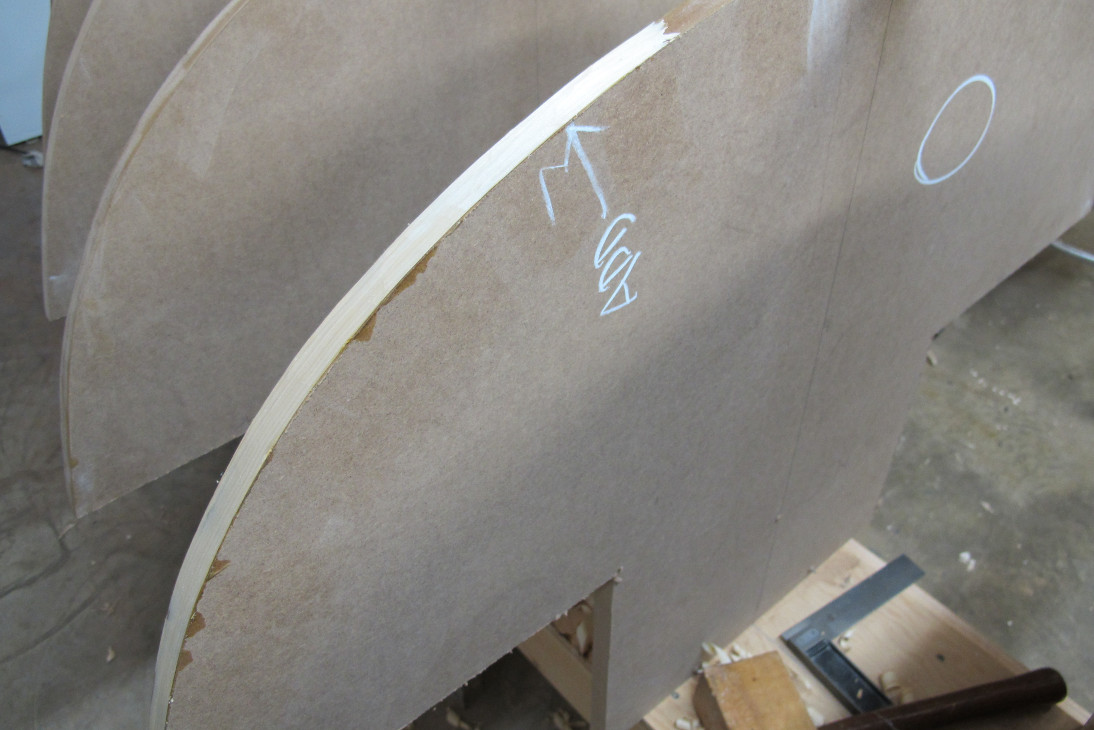 Moral of the story is: I'm not fucking with it anymore. Adjusting molds has sucked up too many hours and has produced net zero result. If it's a bit unfair here and there then too bad for me. I want to proceed with planking!!!

The other major thing I completed in this last session was the transom rebate. After adding my filler strip (scrap cedar planking) I used battens to judge the appropriate bevel at 9 points around the transom's curve. Each constraint position was pared out using my 25deg bevel 3/8" chisel, and then I came along afterward with the 1" paring chisel to cut the rolling bevel between the constraints. Finished result is pretty good and fairs into the aftmost molds nicely when a strip is held tight to the bevel. Maybe my fuckup with the router isn't the end of the world after all!

Figure 52: Constraint bevels on the starboard side of the transom, each 1 hull strip wide and faired to the molds. 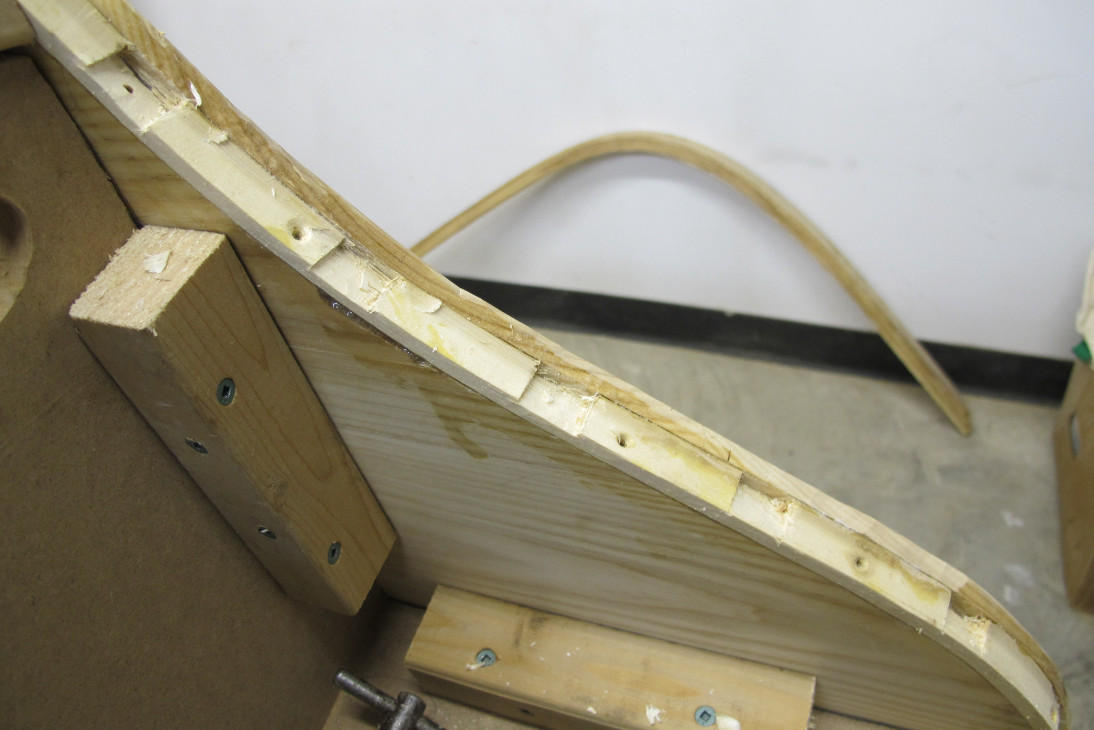 Figure 53: Completed bevel up close - I sanded it a bit after to clean up the hairy bits. 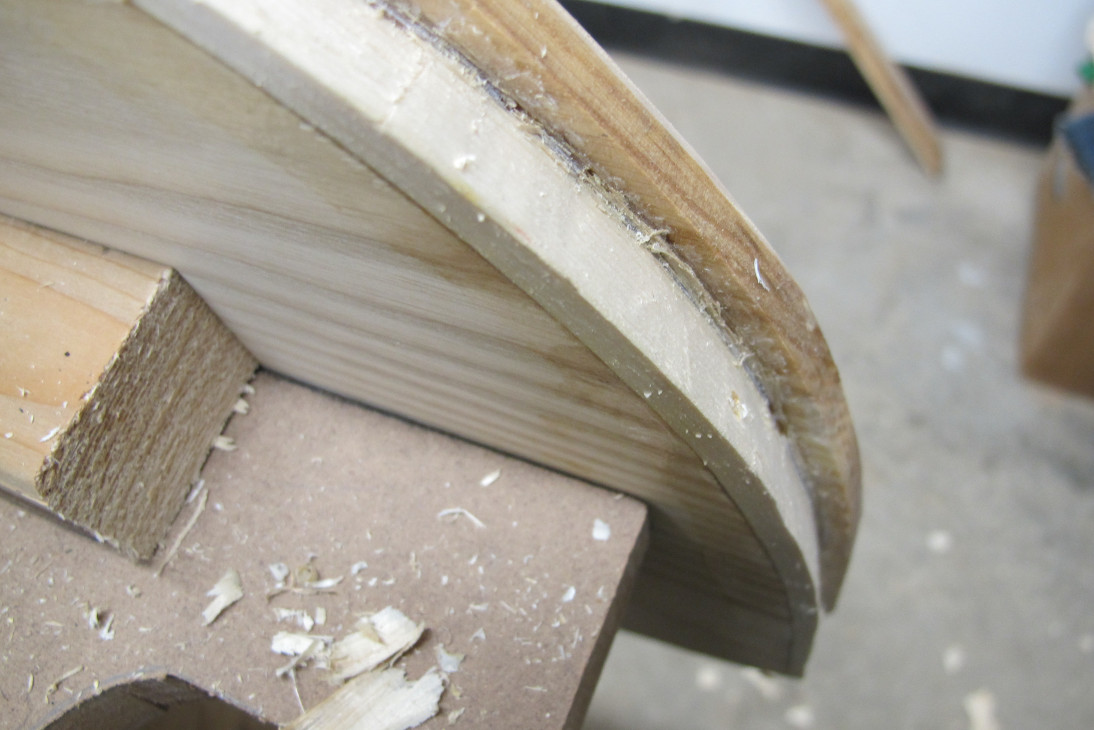 I gotta say, doing some of this work is suuuuch a nice change from sanding and hacking at MDF molds, or running noisy power saws. Paring down softwood with hand tools is just fun all around and I'm glad there's a lot more of it in my future as I cut the bevels on my strips. Forget bead and cove! Note in Figure 54 that I left the bit near where the skeg will connect. This part of the boat is going to be a custom-fit-as-I-go area, so I'm just leaving some extra material until I get near it with the planking.

Figure 54: And the completed bevel on the port side, except where the keel joins the transom. 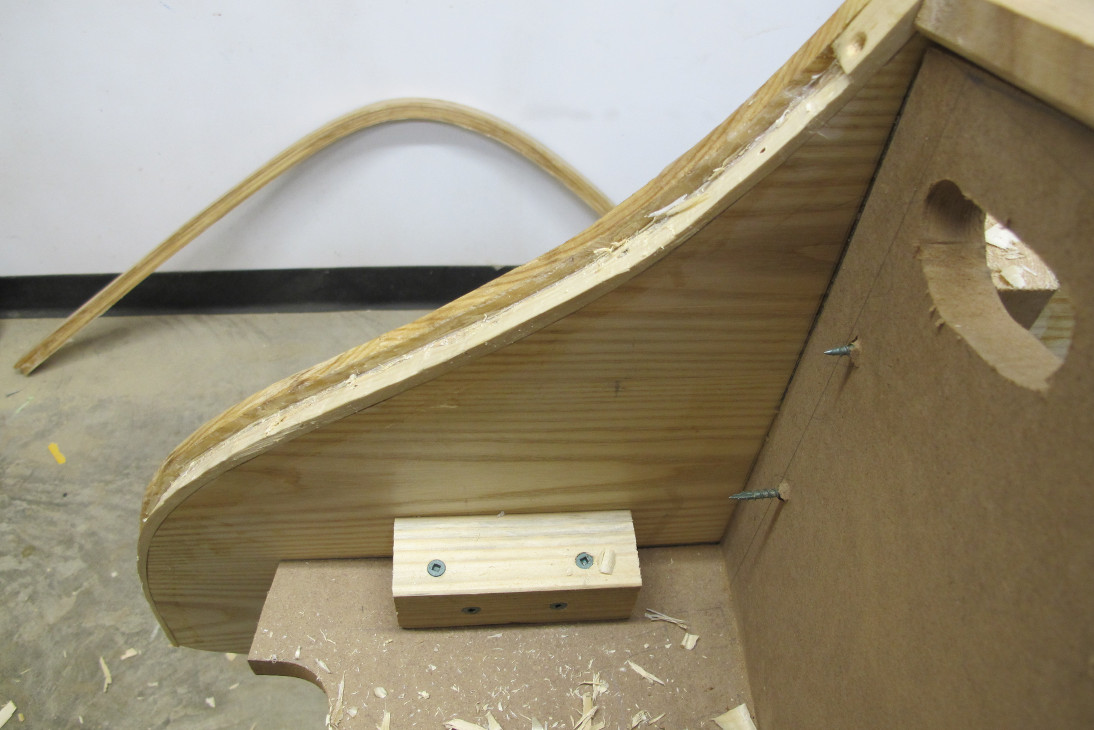 Next trip to the shop is where things are going to start getting exciting! I expect post XVIII to contain some shots of the installed shear planks!!