Tonight I straightened the curve in the keel (see a few posts back). During the fiberglassing session, Dad and I were able to take most of the swoop out of the middle of the keel using strategic application of force. Unfortunately, some of the swoop remained and with the epoxy set, it was much to late to make any corrections. Straightening at this point requires that material be cut away. I had planned for a bevel on the keel to be cut after installation regardless, which turned out to be a good idea because it gives me one last opportunity to true the thing to a straight line.

I struck a centreline down the length of the keel using a tight wire and then offset a line to either side of it. To cut the bevel, I used my larger rabbet plane and finished with my block plane using the keel-hull fillet and my offset lines as guides. The result was surprisingly accurate. In Figure 111, you can see the swoop is almost entirely gone. This is about as good a result as I could hope for, so I didn't press my luck any further.

Final prep for the keel will include a thorough sanding job, a much nicer fillet and a rounding of the keel bottom -- rounded edges are much easier to cover with fiberglass tape and much less prone to damage.


Figure 110: Sighting down the keel after it's straight 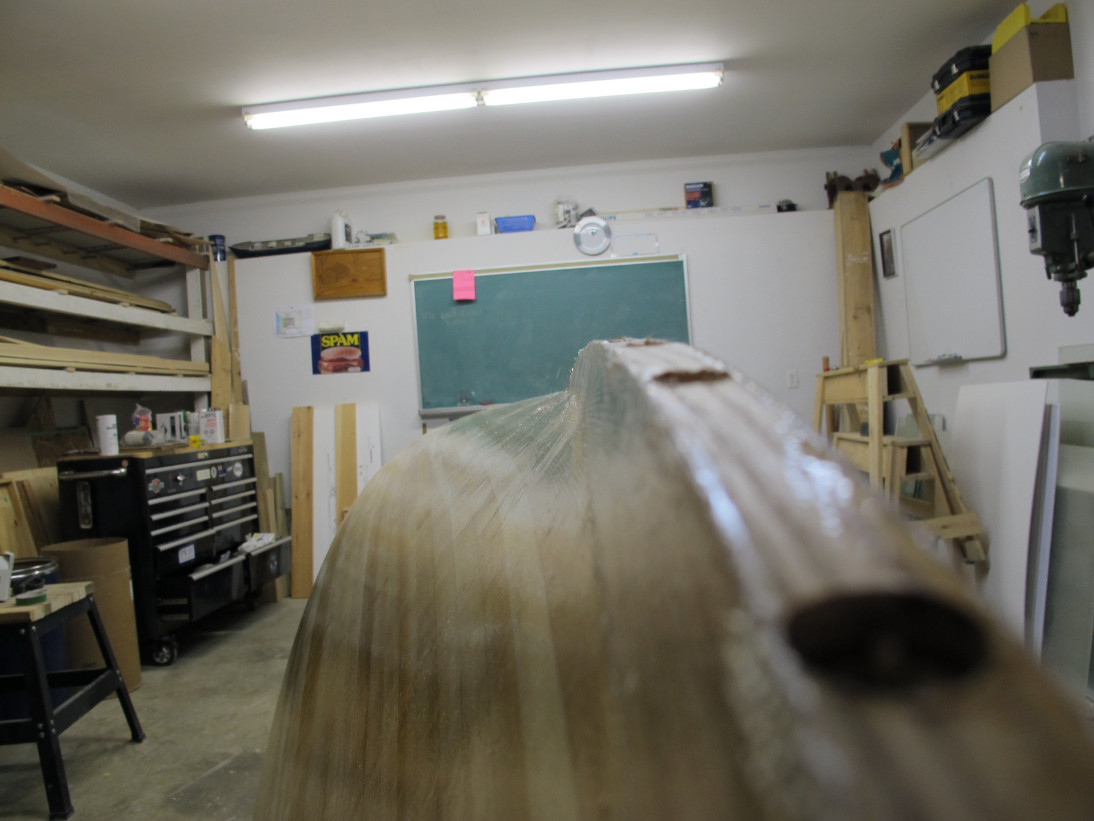 Figure 111: Another view - not perfect, but close enough. 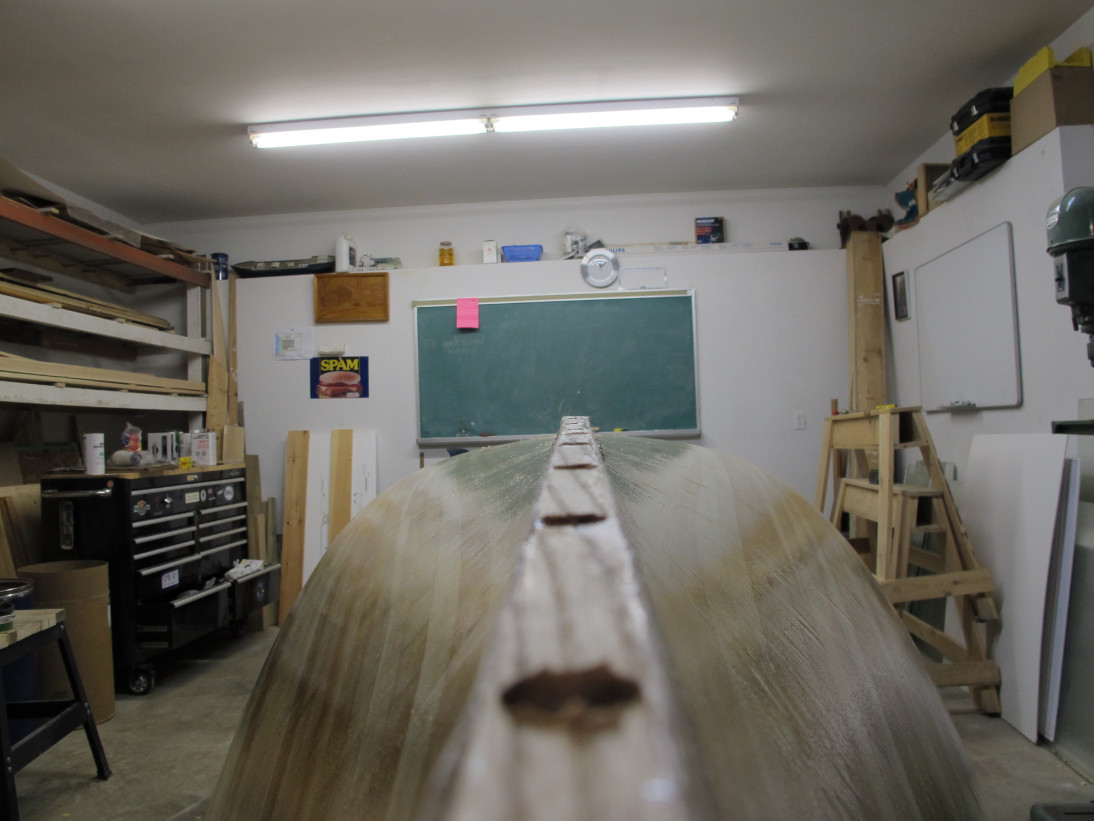 If you recall in the last post I mentioned issues with epoxy pockets. There were several of these at the bow and they looked like absolute dogshit. Easiest way to deal with them is to just sand them away. This of course breaks holes in the fiberglass, and it was necessary to apply patches over the areas that received the most judicious sanding.

Not wanting to build up the shell thickness overmuch, I used some scrap pieces of 6oz glass and laid them right on over top of the sanded areas. These are in areas that will receive paint eventually, so I'm not much concerned about transparency of the finished product. These areas will also be treated to a smear of fairing filler + epoxy to remove any hard edges -- kind of like using drywall compound. It's a good idea to remove a few longitudinal strings from the edge of the patches before laying them up. Not strictly necessary, but it makes an easier job of sanding. 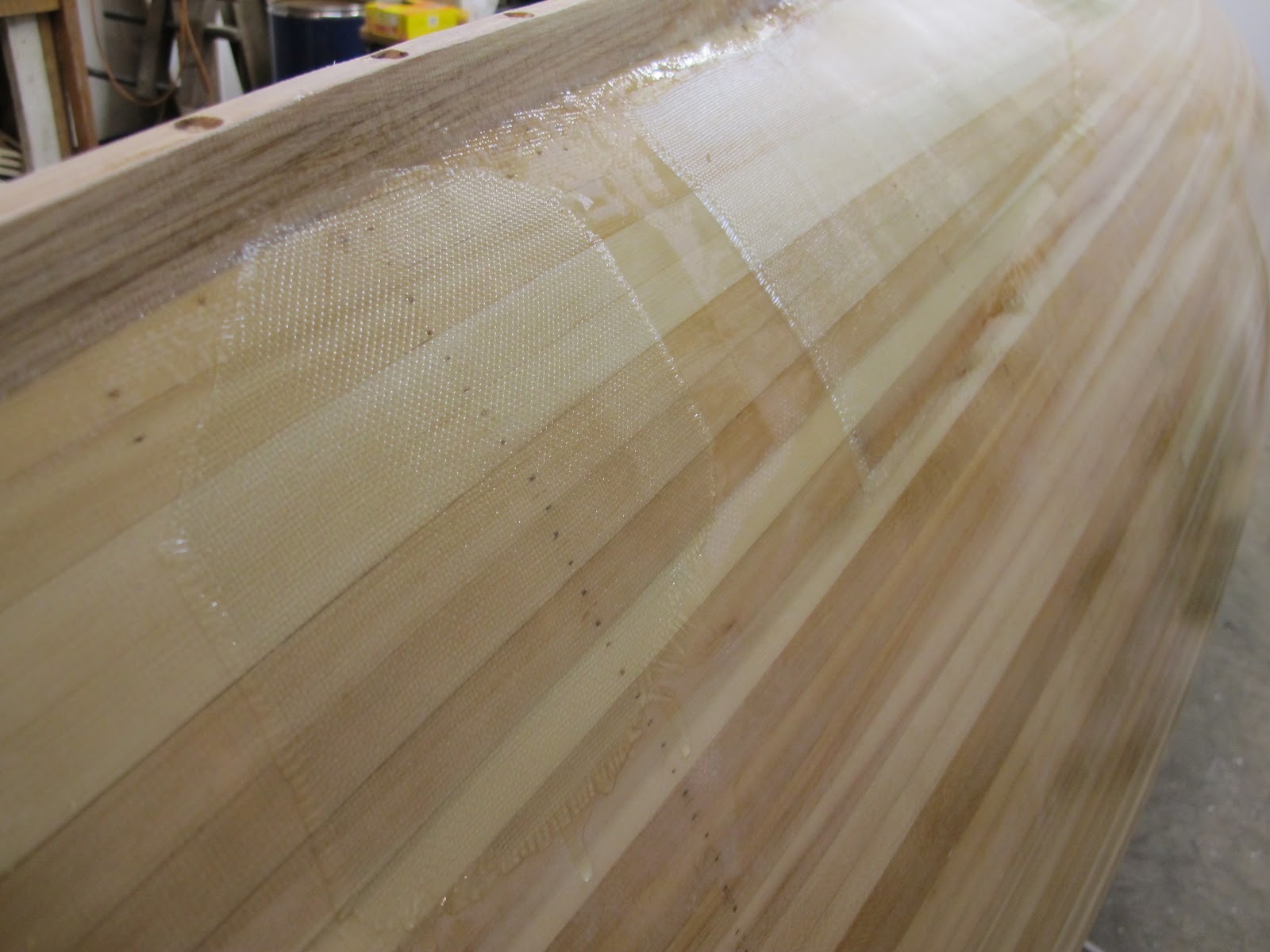 Figure 113: Frayed edges on the patches. 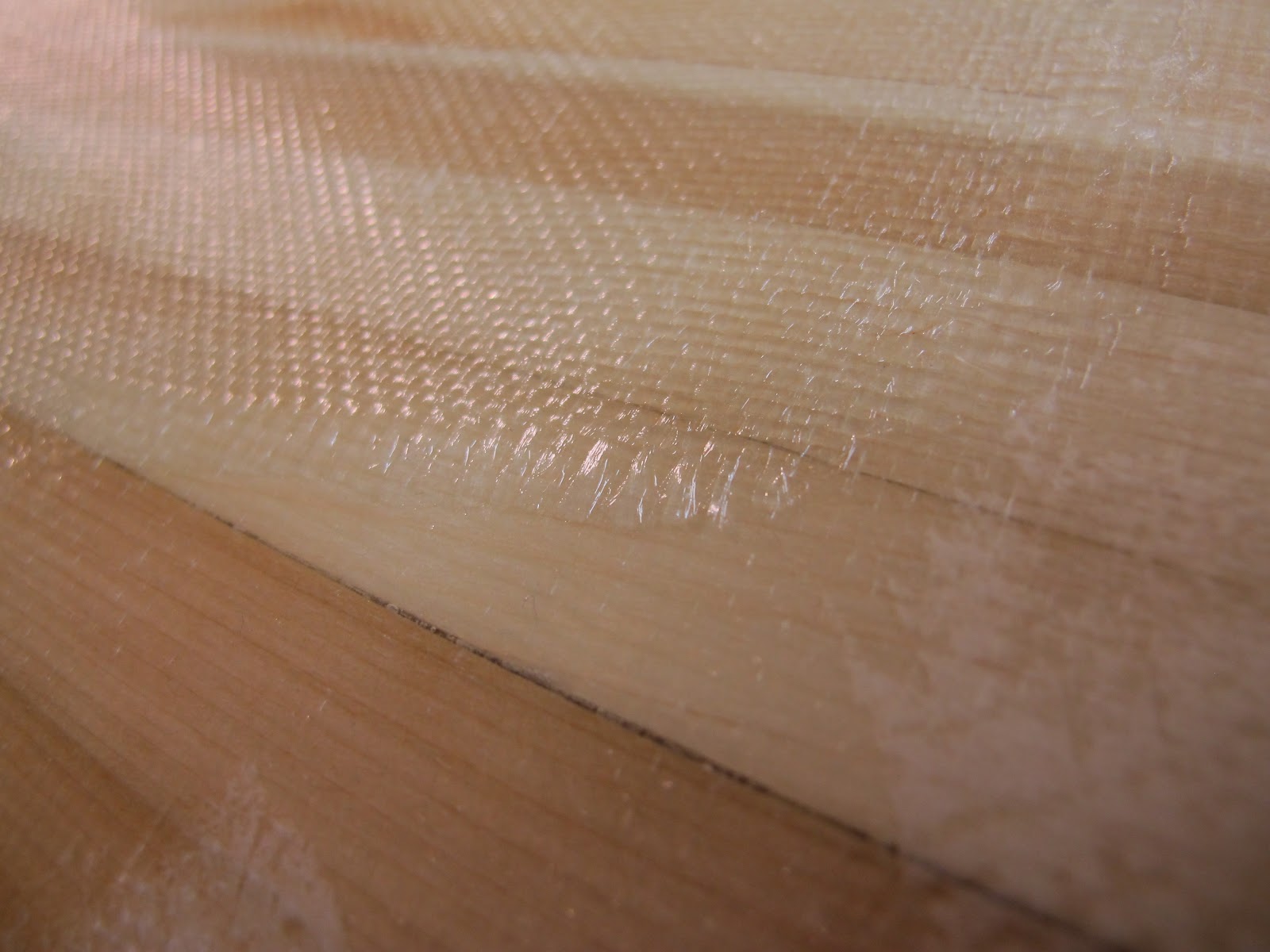 Last job this session was to start manufacturing the gunwales. Wood can't be bought in good lengths in Atlantic Canada (at least from affordable sources) so I needed to scarph-join a couple of shorter chunks of ash. The method here was the same as every other scarph joint -- hack it out roughly with the drawknife, plane to the line on one side, plane to the line on the other side, then remove the ridge in the middle. This process is getting fairly automatic for me now and only takes a few minutes on thin stock; gunwales for this boat are 7/8"x7/8" cross section.

The part that takes the most time now is the resawing and milling process -- much more time consuming that the joinerwork. I only had time to do the outer gunwales. Inner ones will have to wait, but I kind of want to get the inside of the hull glassed up and the knees installed before I figure out just how I want them to look anyway. Inner gunwales can wait.

Figure 114: Partially completed gunwales. Cut to the line on one side only. 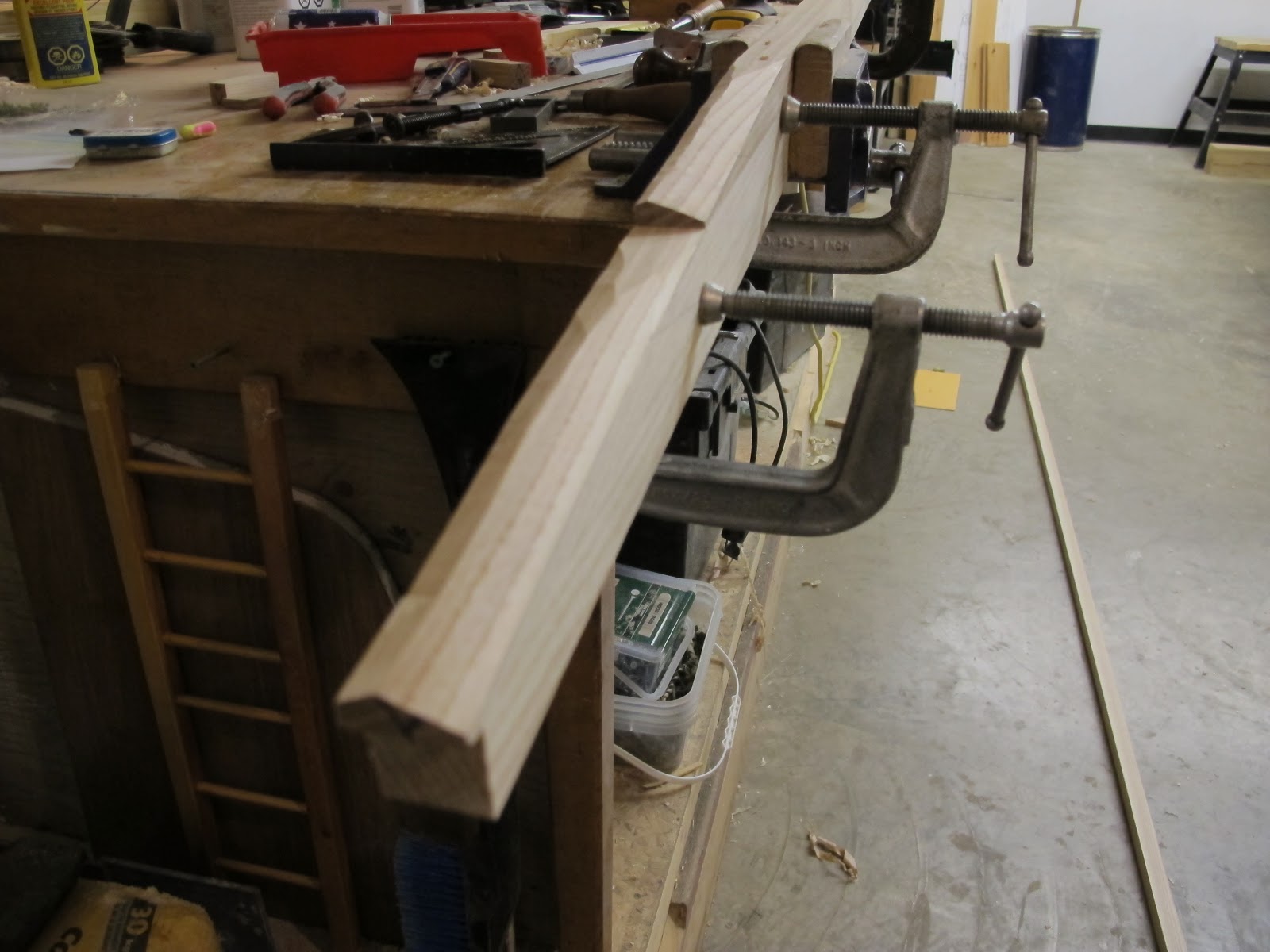 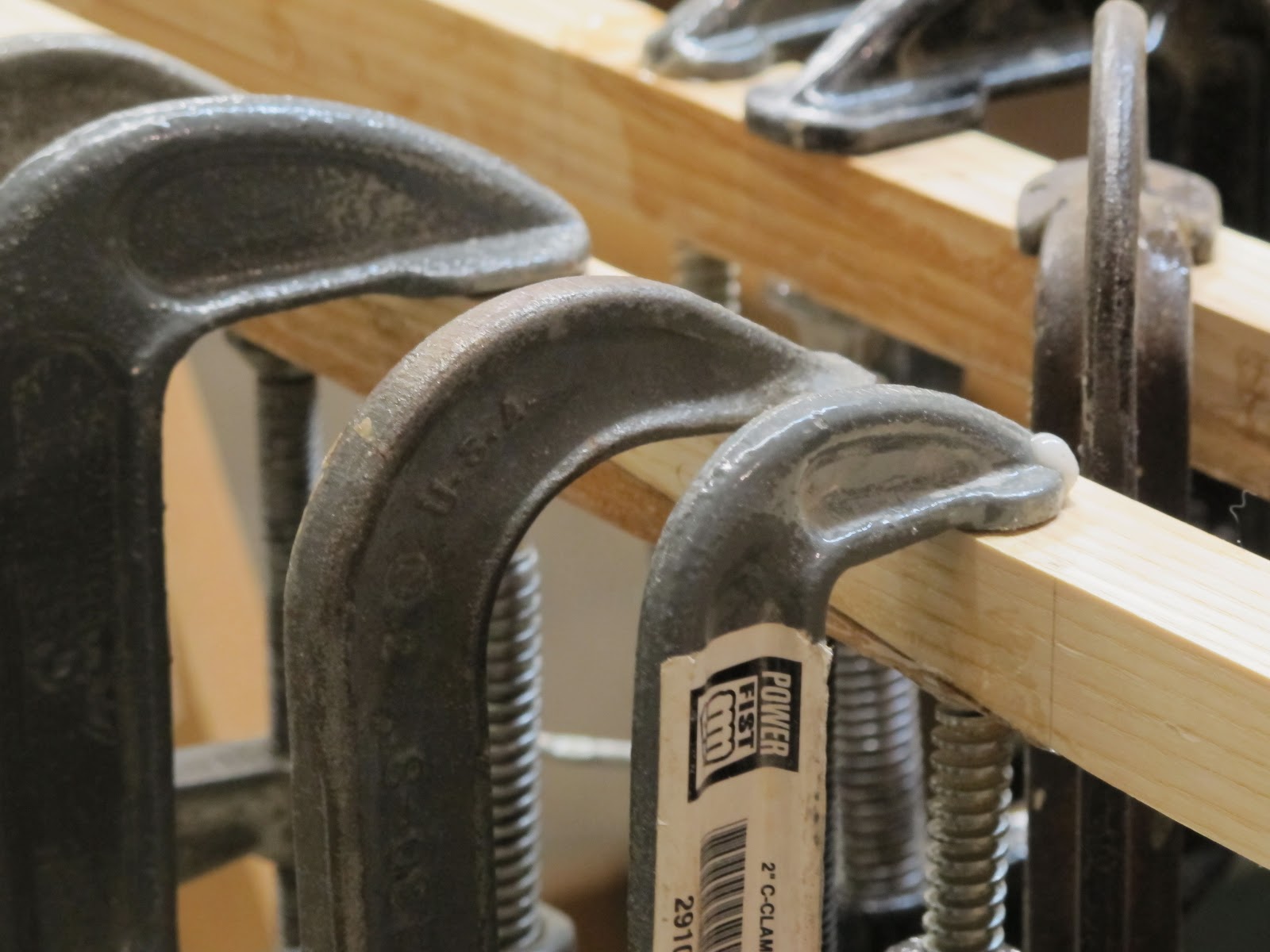 Not a damn thing stopping me from popping the boat off the molds now!!!