Yet another FULL day of fiberglassing. Glad to have the sanding finished for the time being!

Procedure was the exact same as the outside fiberglass for the most part. A seal coat of epoxy was applied first at 5:30 AM so that when my helper (dad) showed up we'd be ready to lay on the glass cloth.

Figure 120: Seal coat applied to inside 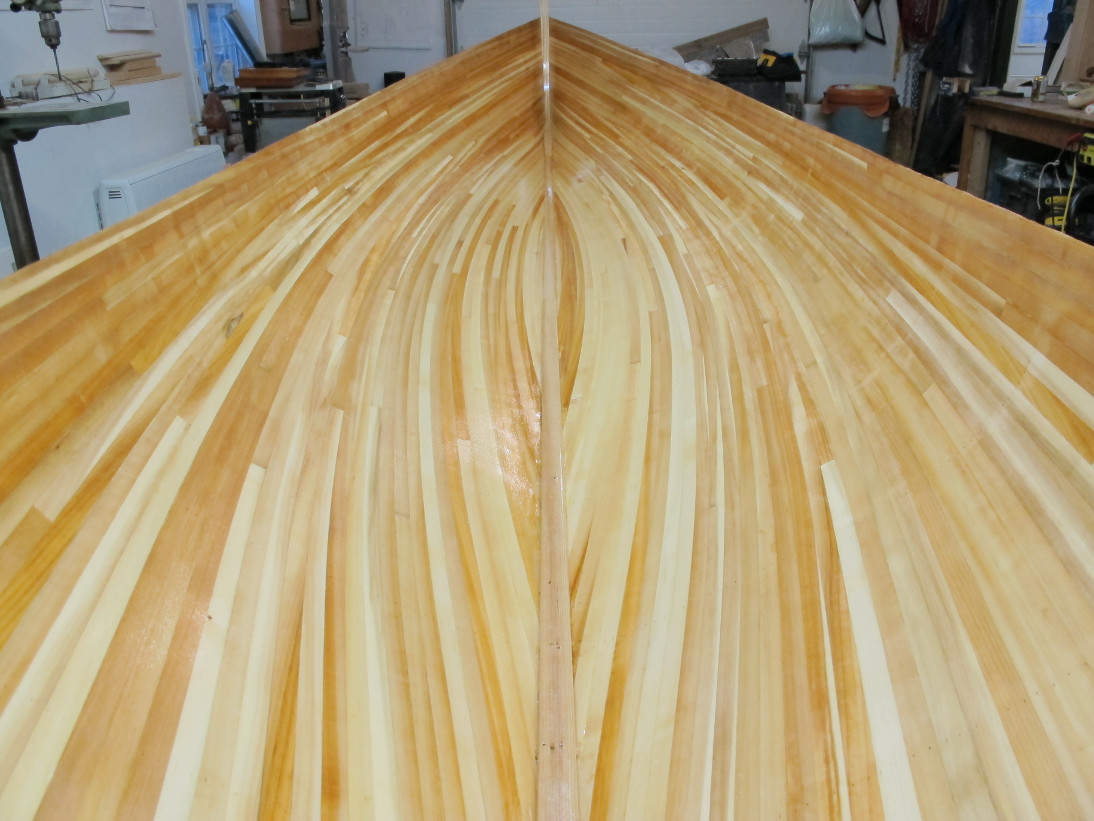 .....or so we thought. Glassing the inside is way more finnicky than doing the outside glass. Getting it to cut to fit convex shape wasn't difficult but damned if we could get the stuff to stick down using rollers to apply the epoxy. The backside (lifting side) of the roller would just pull it right up off the cedar and create massive air pockets. This had us worried but we were able to force the air out by following the wet-out roller pass with a good hard squeegee pass. Once the glass was stuck and the air was forced out, it didn't lift again. After the first little section we did, we removed all the tape holding the glass up at the gunwales. This relaxed the cloth a bit in the turn of the bilge and made it much easier to stick down


Figure 121: Glass wetted out one side, other side awaiting wet-out 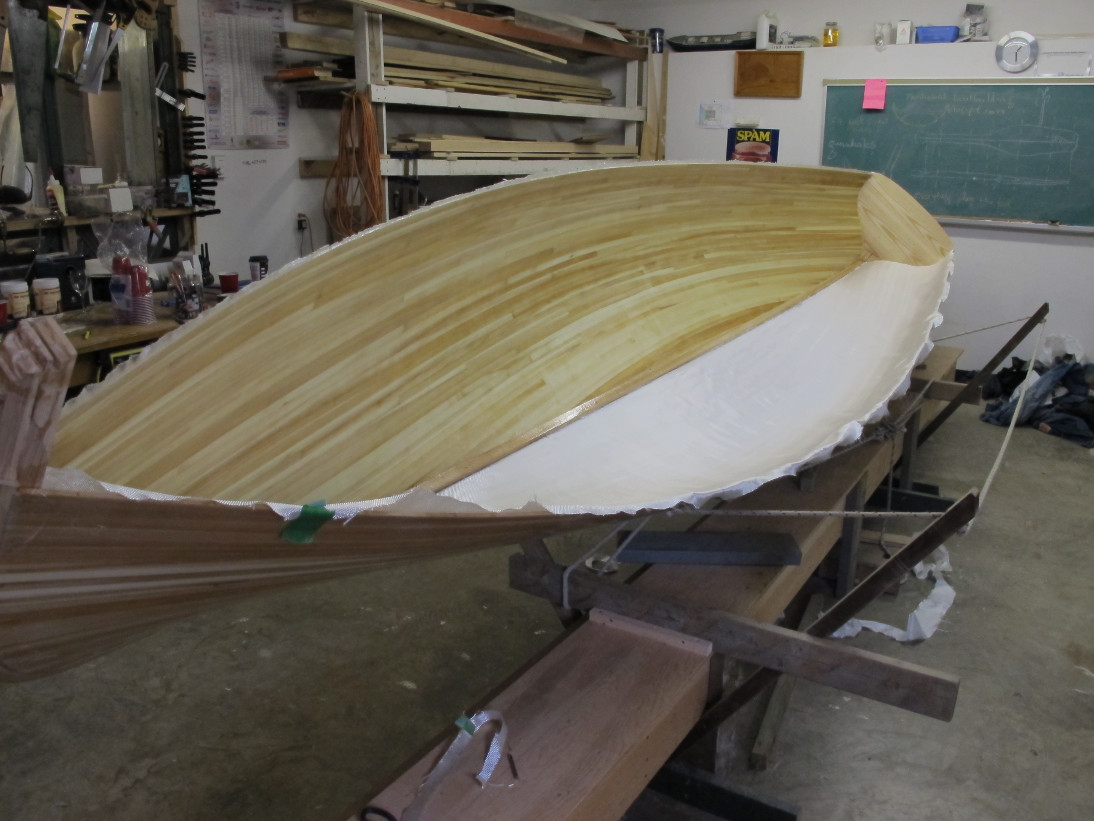 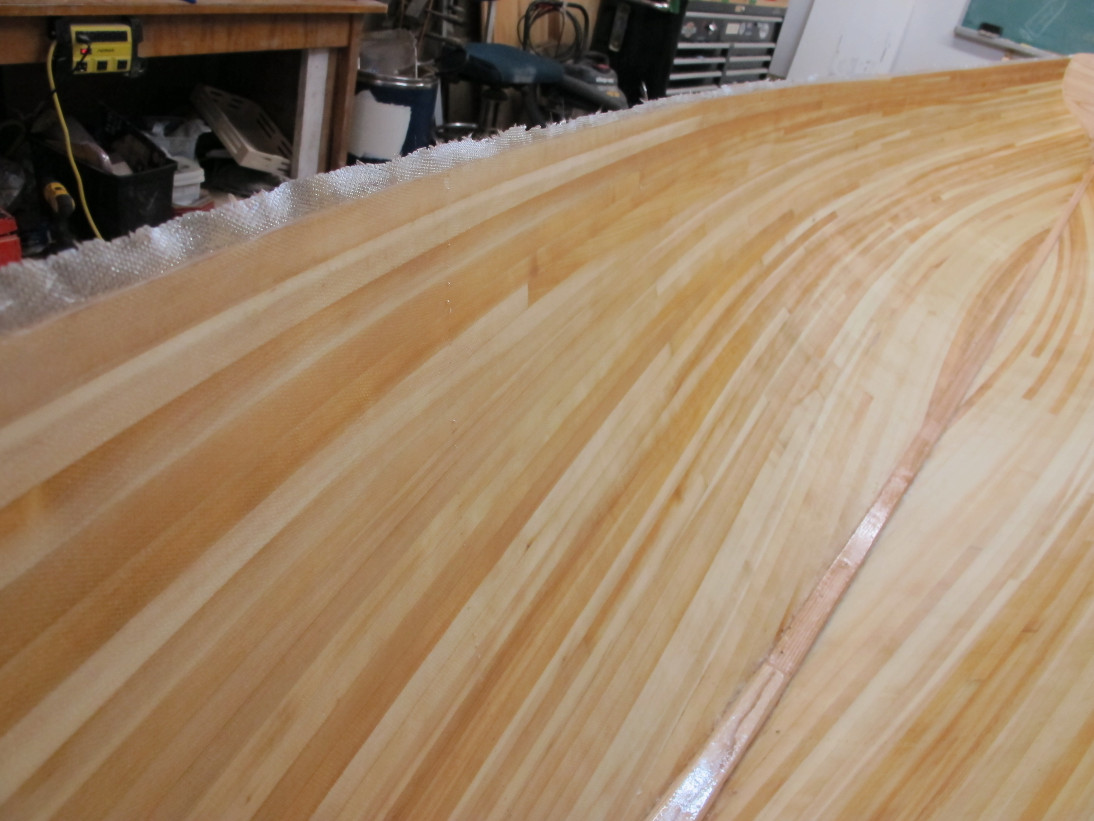 It wasn't strictly called-for in the plans, but I decided to glass the inside of the transom too. Just cut a piece to fit once the main glass sheets had cured and wetted it out. Again done with 6oz cloth rather than 10oz because it is a 1" thick piece of hardwood. 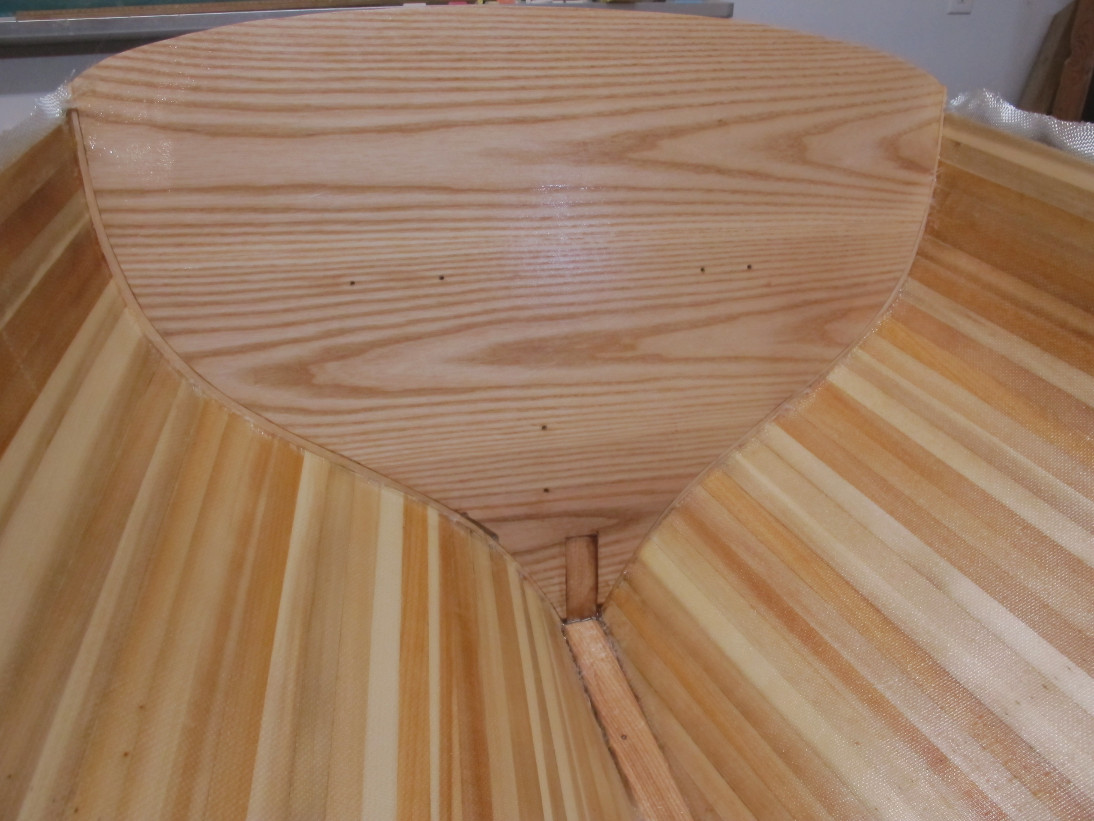 Figure 124: Shot down close in the bottom of the boat - neat curves! 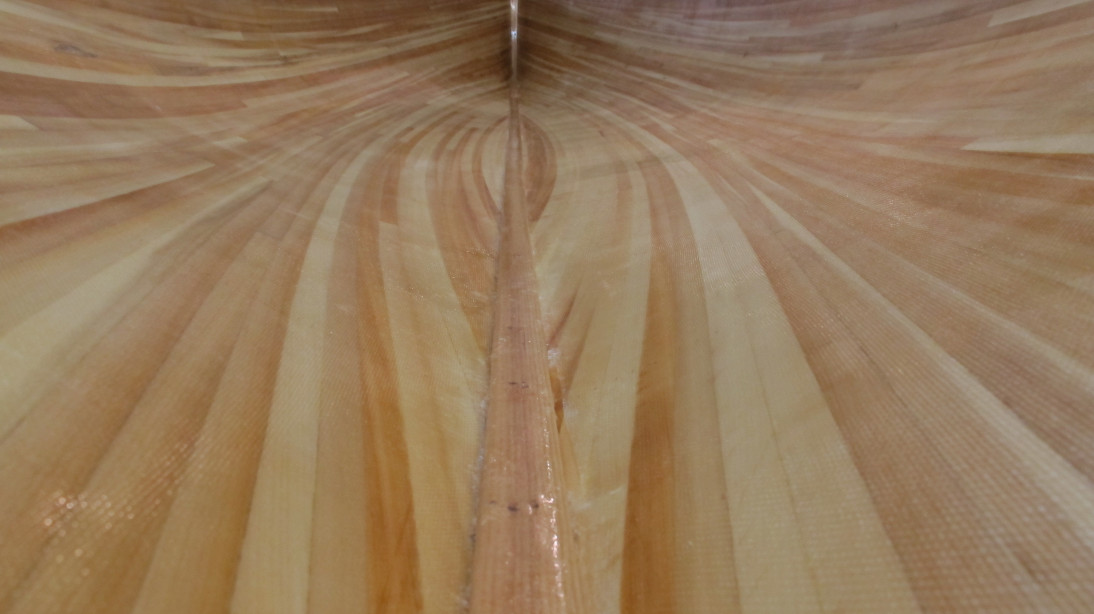 Filleting was a bit of a pain in the butt, but necessary. The fillet is a structural joint that ties the glassed sides into the transom, keel and stem. Fillets go anywhere there is a corner. There will eventually be fillets around the floor pieces, around the sternpost knee, around seat supports and around seat knees. I plan to use mechanical fastenings only for the gunwales, sheer knees and breasthook since these pieces often get damaged and need to be replaced before the hull is worn out.

I used big 60mL syringes as applicators and filled them with epoxy + filleting mix. Mixture consistency is supposed to be approximately peanut butter (ie does not drip when you scoop up a gob of it on the stir stick). Any less than peanut butter and it will drip & droop while curing.


Figure 125: Fillets applied at transom and along keel 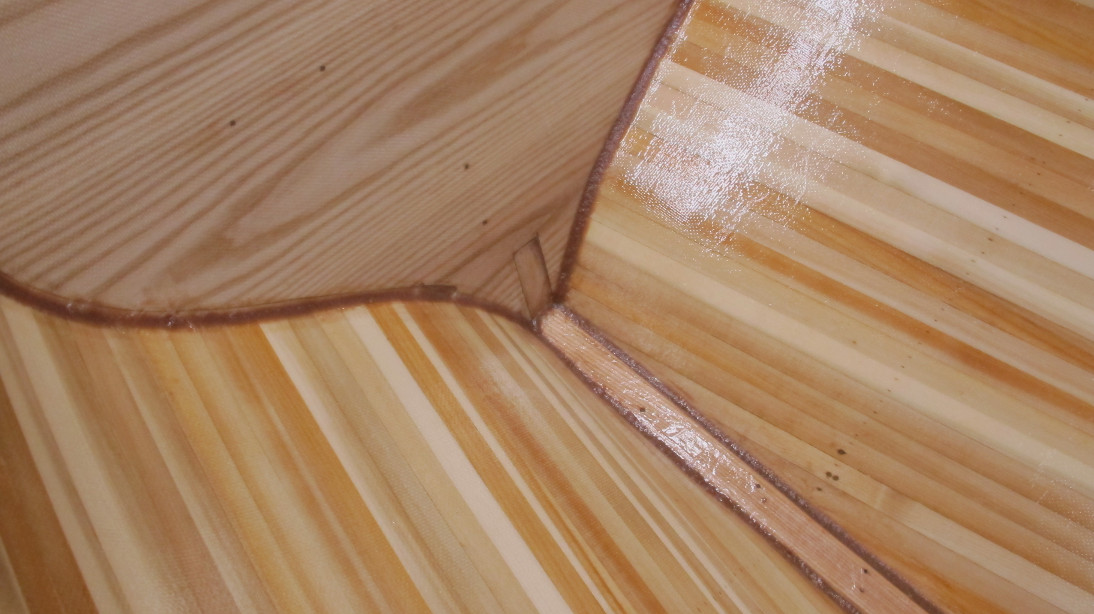 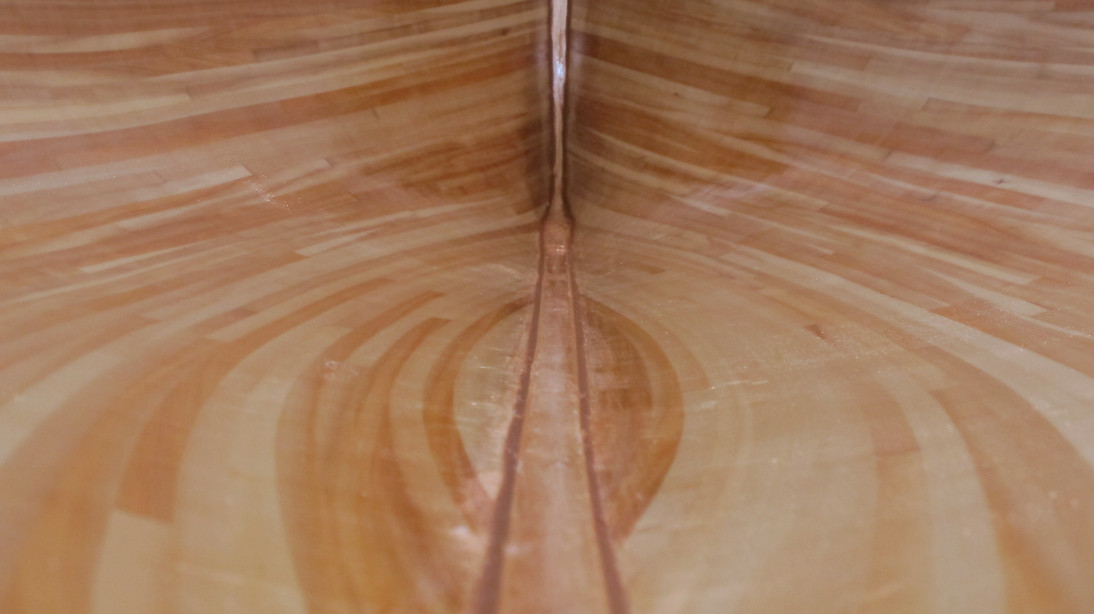 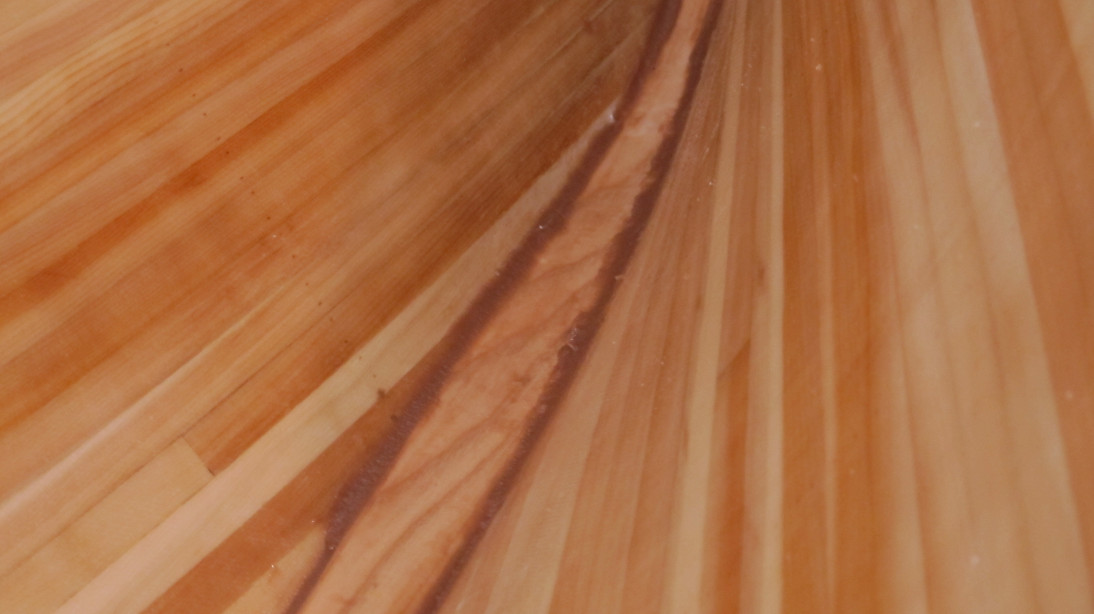 Figure 128: Fillets along the keel up close -- these ones turned out pretty good. 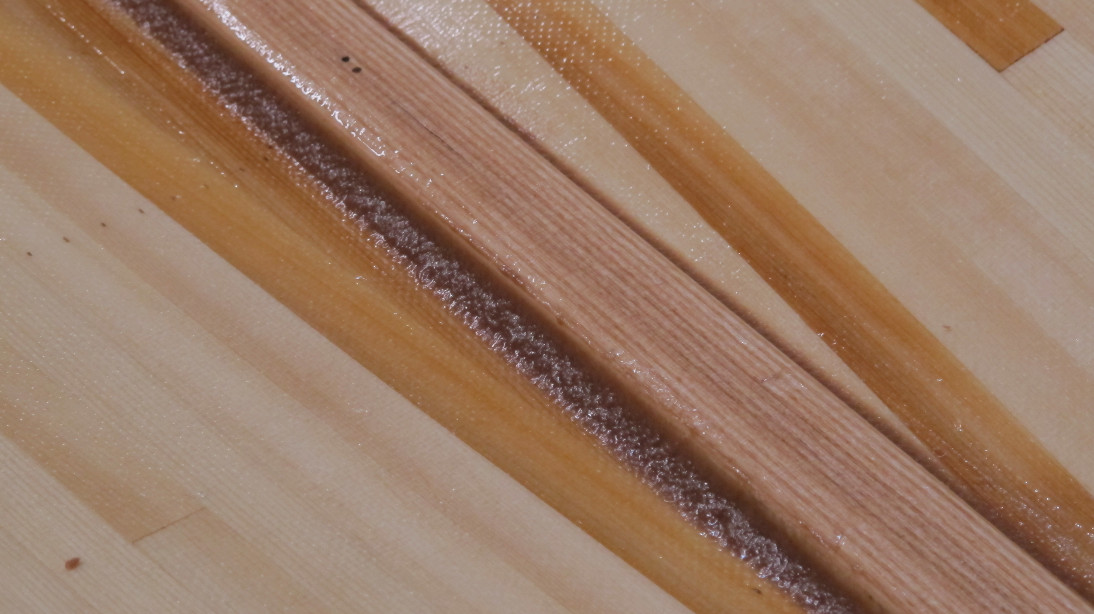 Filleting tools are absolutely necessary for neat fillets. The simplest thing would probably be a tongue depressor like you'd see at the doctor's office; I made one out of a scrap of ash. To use, just drag it over the fillet blob making good contact with both sides of the joint and holding it at a bit of an angle so that the epoxy oozes out neatly behind. The idea is not to remove epoxy (unless there is way too much); you just need to smooth it out.

For making one, key thing is that the business end has a sharp edge and a radius that more or less works everywhere. Twisting the tool slightly will allow it to sit a bit deeper in in the fillet for areas where the radius of the tool tip isn't quite right for the angle of the joint.


Figure 129: Super high tech filleting tool I made for the task. 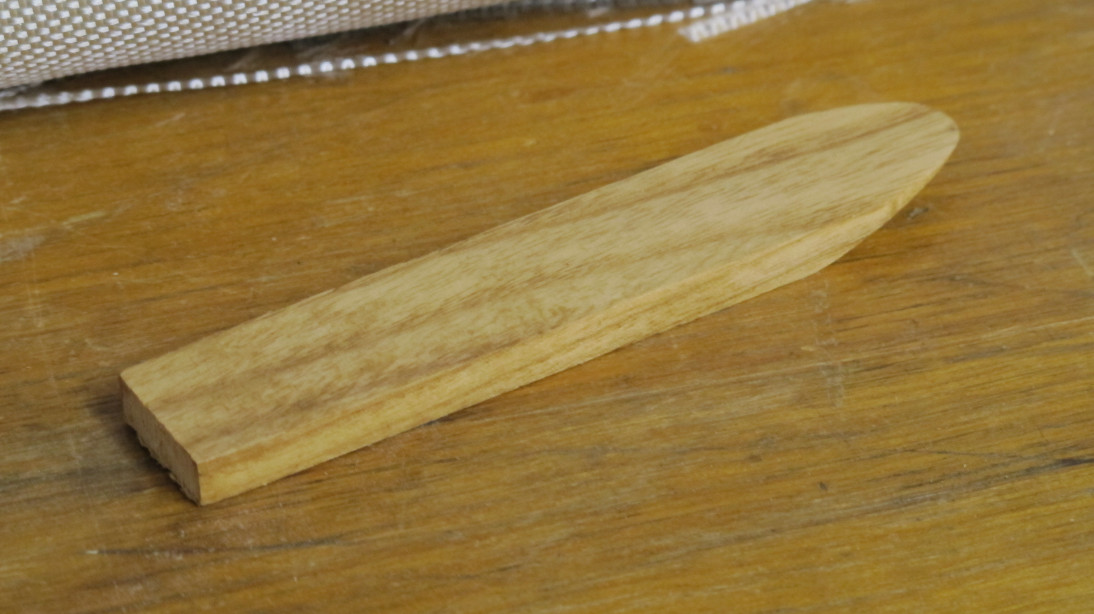 Figure 130: Other side, showing the sharpened edge.