I am getting into the finish work on the boat now. Harry Bryan and Wyatt Lawrence's boatbuilding basics course last year gave me some good training on how to proceed with the knees and breasthook, and the complex bevels required to make them fit the boat. All of these pieces are going to be attached with mechanical fasteners only (in case they need to be replaced down the road), so it's important that they fit right.

The primary measuring tool used for this purpose is the bevel gauge. I have a cheapo Canadian tire gauge but it is far too big to use in confined areas, and much too clunky for tranferring bevels to paper. Luckily, Harry has a book out on how to go about making a much more conveniently-sized gauge -- link:

Harry's book shows how to make a single-blade gauge and a double-blade gauge (pic from Harry's book in Figure 131) from a few pieces of brass sheet and a couple of copper boat nails. I chose the double because I'll probably only make one gauge for the time being. Size of the blades is pretty much arbitrary and you can make one as-needed for virtually any size & length within reason. WARNING: this takes a lot longer than you think it is going to!!! 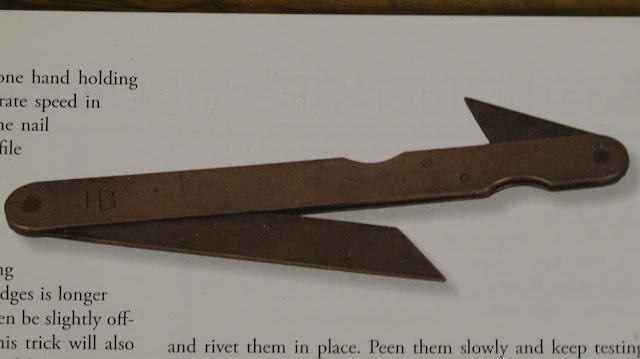 First order of business is to cut the stock. I'm sure sensei Harry built his out of scrap brass and old nails, but I don't own a *real* boat shop yet so I bought materials new, figuring I could use a bunch of it for protective coverings on high-wear areas of the finished boat.

I marked a 5/8 line parallel to one edge and started sawing with the hacksaw. This is naval brass --harder than regular utility-grade brass -- but is still pretty easily cut using a hacksaw. About a half hour later I had 3 strips at 12" by 5/8" by 1/16". These were then cut to length, including the 45deg angles on the ends of the blades.

Figure 132: Cutting carefully along the line 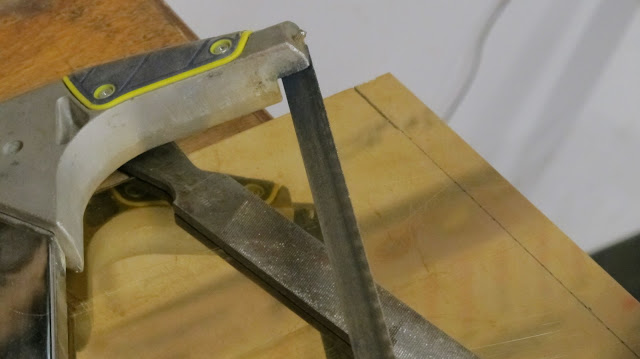 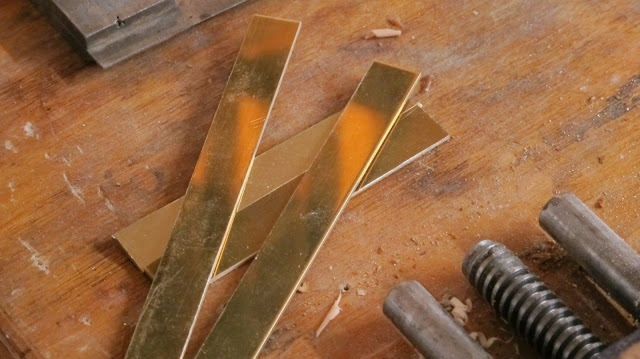 The procedure for riveting the pieces together is a bit fiddly and it took me more than one attempt to get it right. I'd recommend anybody trying this to experiment on a few sacrificial pieces first. Also buy Harry's book as it describes this all in quite a bit more detail. 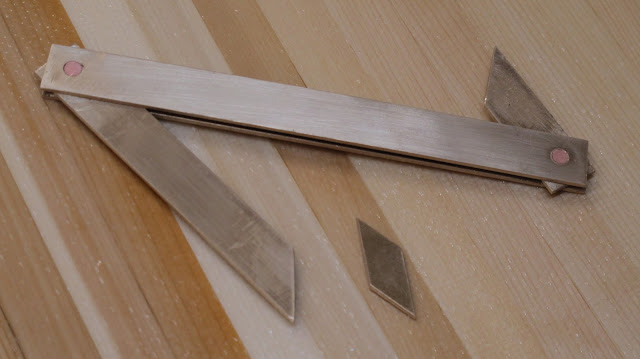 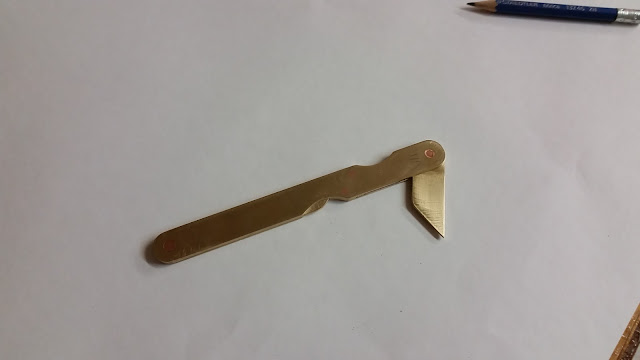 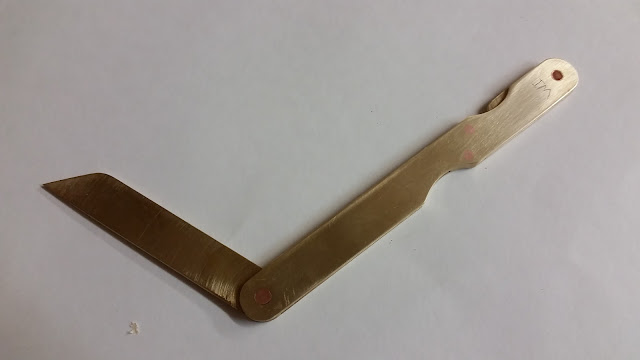 That gauge took 1.5 boatbuilding sessions. I am proud of it, but glad to have it out of the way.

We had a couple evenings of good weather so I took advantage to do some milling outside where I don't have to be bothered so much about dust. I resawed some ash stock to form the inner gunwales (1" x 7/8" cross-section this time). These were scarphed at the midpoint and glued with epoxy + adhesive filler. Note: I left the gunwales very long on purpose (about 3' longer than necessary) so that there would be plenty of room to stagger the scarphs on the inside and outside parts. I don't think the epoxy is so weak that it matters strength-wise, but it would look bad to have them in the exact same spot I think.

Figure 137: Inner and outer gunwales all ready to go -- up out of the way 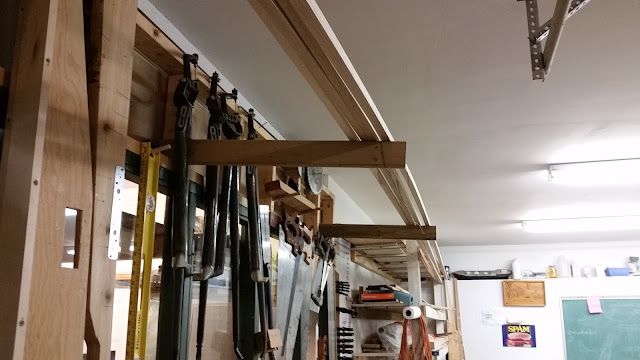 Finally, I built templates for the reinforcement pieces -- the gunwale-transom knees, the breasthook and the keel-transom knee. These were made by picking up angles with my bevel gauge from the boat's hull and transferring it to bristol board. The layout I've chosen below is deliberate too -- grain should nominally run on diagonals to the corner being reinforced. It makes for more wasted wood, but much greater strength in the knee.


Figure 138: Knee and breasthook templates laid out on stock 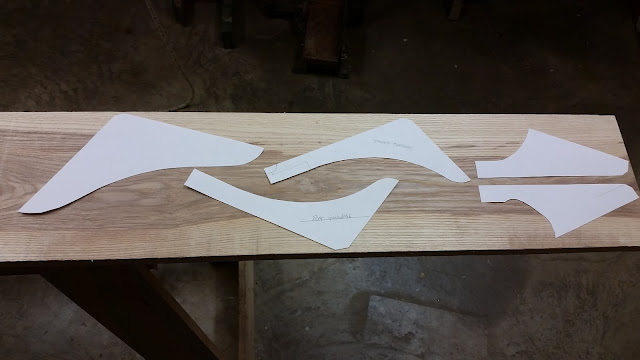 The figure below shows the joint I intend for joining the inner gunwales to the knees/breasthook. It's not strictly necessary to do it this way, but I think it looks a lot better to have a lap joint of this type. The 4" long slot with rounded ends shown right at the edge of the bristol board is the aft-most scupper in the inner gunwale. These are a good feature to include in the inner gunwale because it makes it easier to dump all of the water out of the boat when you turn it over.


Figure 139: Closeup of the knee layout where it joins the inner gunwale. 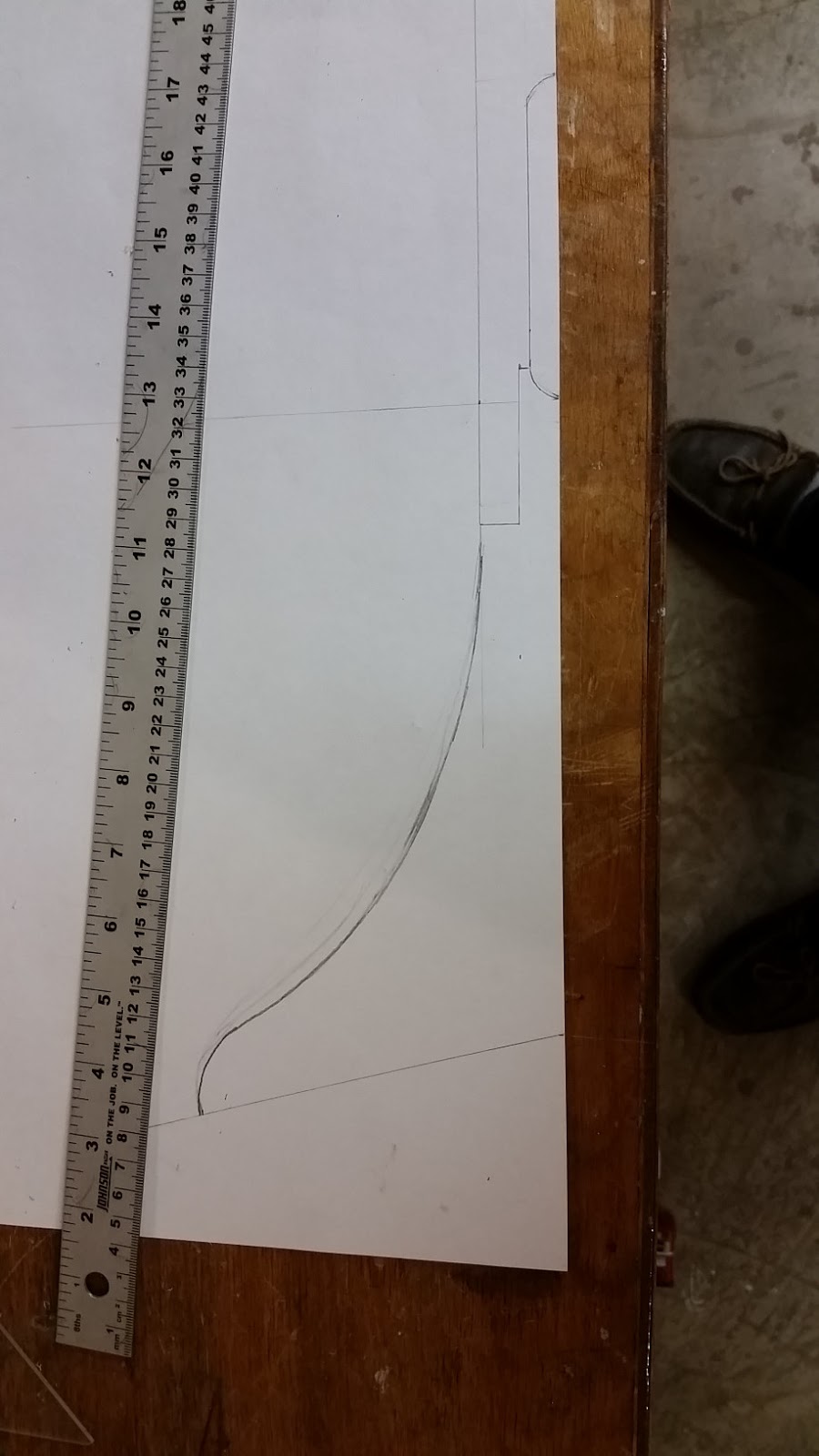