This session concerned mainly the addition of gunwales, fastening of knees and cutting of the joints where the two meet.

Had a good discussion about screws vs. gluing gunwales on the woodenboat forum. The internet at large is split on this issue. Some say "glue glue glue", some say "both screw and glue" while others say "screw in case you want to remove and repair the gunwale". On the wooden boat forum (the opinion of whose members I tend to value highly), the general consensus was that "glue is how the designer specified it, so glue it must be". They also had grave concerns about anything that might penetrate the cedar core and allow moisture inside. Gluing obiously requires no penetrations, and is far less likely to cause wood decay or delamination.

That opinion makes a lot of sense to me, but at the same time I really like the look of the gunwales being "buttoned up" with screw heads showing. Whatever...I just do. So I decided that I am going to both screw and glue these in place. Glue along the entire mating surface will effectively seal out moisture, and the screws (if predrilled) will help me clamp it down as I assemble and avoid me making a messy job of it.

I also don't have enough clamps to do a good job!

The other bonus is that the fasteners will provide a lot of extra holding power and will avoid me needing fillets for the gunwales. I find the fillets look like absolute shit...so I want to avoid them wherever I possibly can. Screw and glue it is!

The outer gunwale is a straightforward thing to add. Just clamp in place, put the knee inside and fasten it with screws. I did the same at the bow and stern to hold the 2 ends of the outer gunwale, then repeated for the other side. 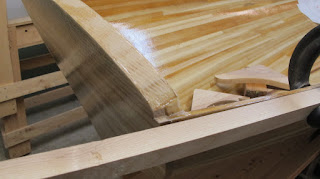 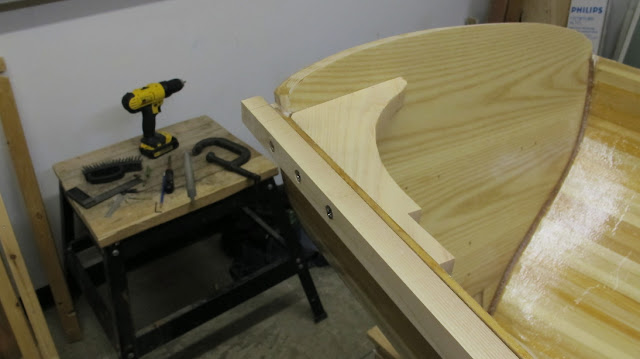 Figure 142: Repeated on the portside 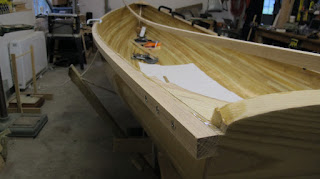 These things cannot just be driven into the wood without splitting it. Maybe on cedar, but certainly not on hardwood. Predrilling also makes the teeth grip better since they're not pushing wood grain out of the way as they bite in. You need 3 drills here.


To set a hole for a screw, start with the countersink and make sure the angle is right. Sink as needed for a flush screw head or a subsurface screw head. Swap to the long pilot and follow that hole to get the full depth (nominally the length of the screw). Finally, swap to the clearance bit and bore the outermost pieces of wood (in this case my outer gunwale + hull thickness).

Now when you sink the screw you won't split wood, it will draw the outer pieces of wood onto the inner piece, it will give maximum holding power, and you'll have a minimal chance of twisting the head off the screw.

A couple of quick zips on the bandsaw and my knee / inner gunwale joints are made. The transom knee joint will have the aftmost scupper built in. This was repeated for the breasthook, though I did not cut that scupper yet. I discovered one unplanned-for issue at the bow: I didn't arc the breasthook -- it goes straight across the boat.

Figure 143: Notch for the aft scupper and joint with the transom gunwale knee 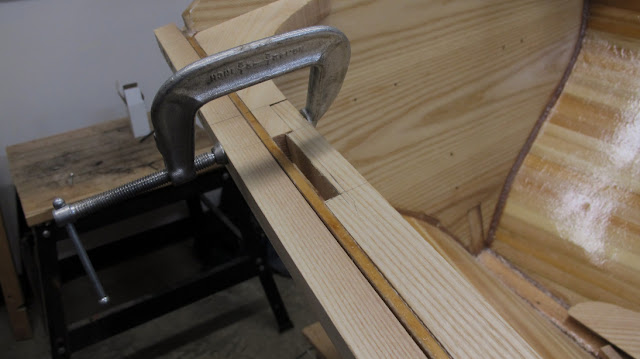 The flat breasthook means that the angle of the inner gunwale needs to roll from the flared angle of the hull near the bow to something that goes straight across. I gave myself 3 feet of gunwale to make the roll. I just took the required bevel angle off the breasthook where it meets the hull, and put the same angle on the inner gunwale. Maximum bevel is where the gunwale-breasthook joint is, and minimum angle 3' back from that. Offending wood was shaved using a plane and presto! It fits perfectly. 3 feet seems to be about right too; it's gradual enough to bend without steaming, but noticeable enough that you might think the builder knows what he's doing! 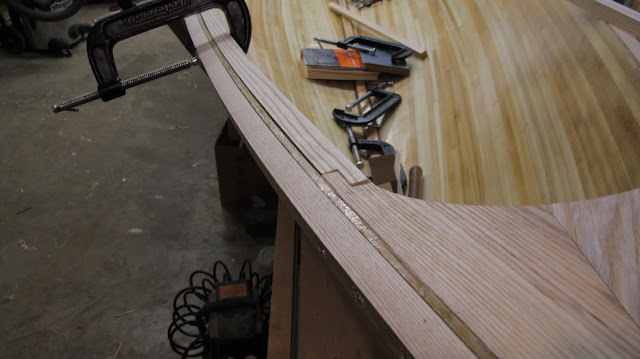 Figure 145: Completed starboard side assembly at the bow. 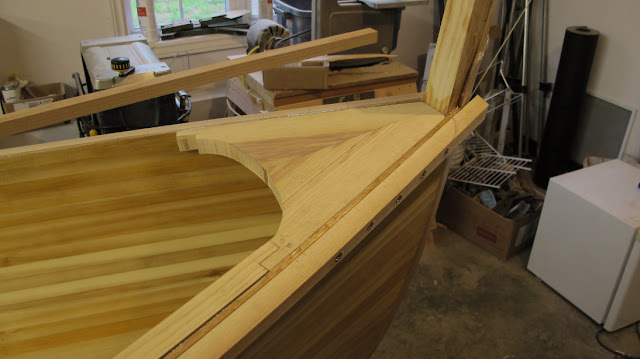 My decision to glue AND screw was a good idea in the rolling angle too. Acute angles like that are very hard to clamp tightly. The screws do a much better job than clamps of pulling that bevel right around so it meets the breasthook flush. 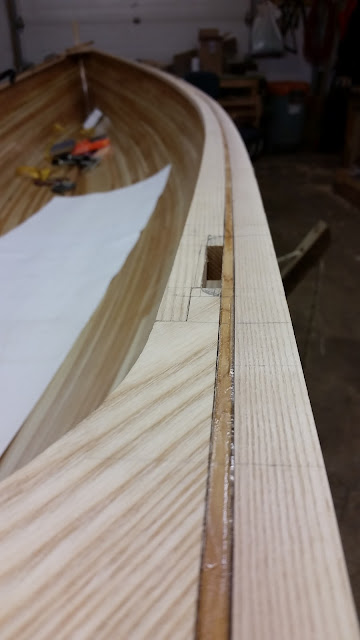