I mentioned in the last post that the top of the transom would be covered in a cap piece. I made that in a quick session one night between baby feedings. I hauled out the steaming rig again and sawed up an MDF mold from my transom template. The hook-like indents on the sides of the mold are there so that I can get it firmly clamped down around the tight arc at the ends. -- clamps don't work on wedges!


Figure 163: Mold for the transom cap 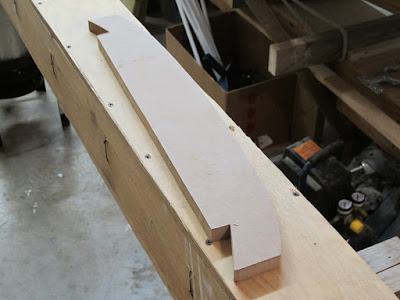 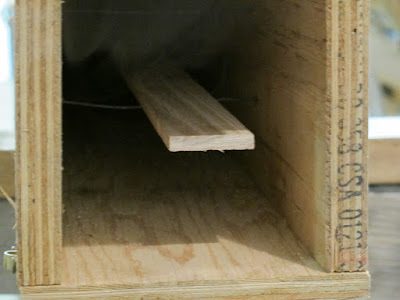 Figure 165: Removed from the steambox and quickly clamped 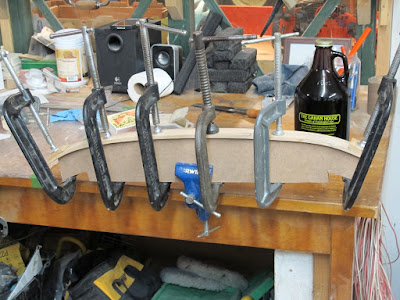 The seats took me awhile to figure out. A lot of sittin' and starin' was needed before I came up with a method for this instance. You have a few things working against you at this point in the build:
So how the hell do mount a seat square and level with the waterline in a boat where absolutely no reference surfaces are square or level? Opinions vary -- some people reference the sheerline, others reference the keel, some people have homemade jigs specially-built for the purpose and others reference everything to a spirit level. They all work, but I didn't want to get into making more custom tools for a one-off part. Susan Van Leuven's book "Woodstrip Rowing Craft" has a good section on this and it looked fairly easy to emulate.

First thing is to span the gunwales with the rough stock you intend to use for the seat, positioned above the spot where the seat will sit. Measure on the plans how far down the seat should be (both forward and aft sides) from the sheer. Drop a perpendicular from the seat down the appropriate distance and mark the inside of the hull. You can't just measure along the hull from the sheer because the plans show only the vertical distance.  Do this for both sides of every seat board. The tilt on the seat won't be perfect but will be close enough you can adjust it later. 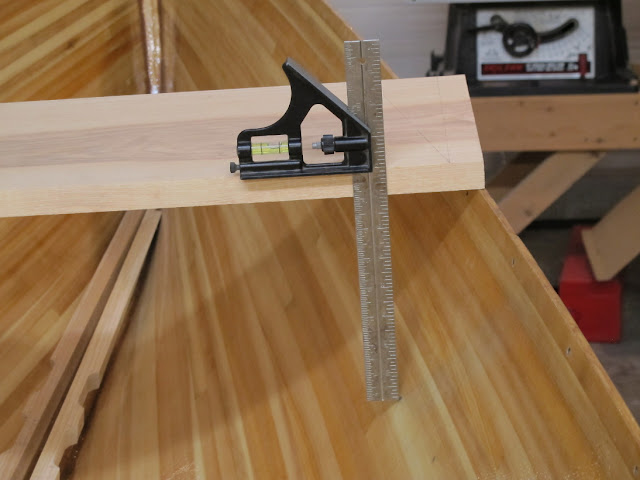 Before setting to work on the seats you need to measure between the marks on the inside of the hull. I use a floppy tailor's tape-measure for this because it's hard to get an accurate measurement with a regular metal tape. Lay out the measurements on the board and cut the ends -- you will have a bunch of trapezoid-shaped boards at this point. Test the fit and see that the seat fits into the hull and the bottom corners lie on the marks. If things don't lie quite on the marks, strategically trim the ends of the seat until they sit flat (no wobbles).

Next thing is to pick up the bevel from the side of the boat. In my boat, the seats sit just above the bulge where the curvature is sharp. At this spot on the hull the bevel changes a fair bit over the thickness of the seat stock. Best spot to pick up the bevel for me was at the bottom edge of the seat because this is roughly where the seat will sit when it's properly beveled. I did this for all 4 corners of each seat and transferred the bevels to the corners.

This method is better in a lot of ways than going from plans because it allows a custom fit for a hull that might not be exactly the same as it was when it was stapled to the molds.

Figure 167: Estimating bevel for the seats/thwarts 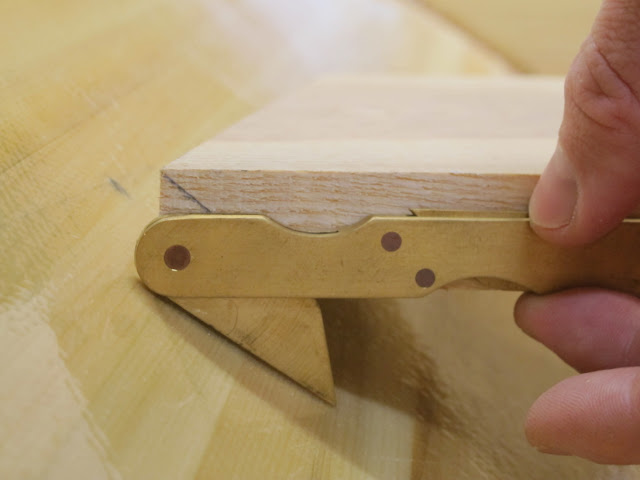 The midships seat needed some adjustment to come square with the keel. I made the adjustments using a cardboard template and transferred the new shape to the board. After cutting it, everything fit perfectly.

Figure 168: Cardboard template of the longest seat/thwart to aid with adjustments 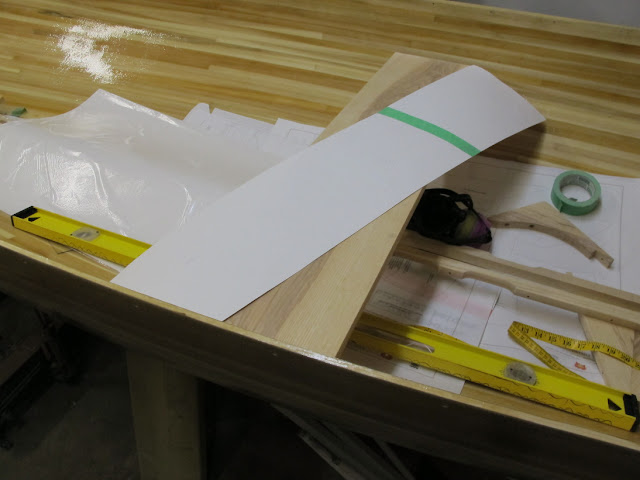 Cutting bevels is the same as ever. Join a line between the fore and aft bevels on the underside of the seat and start planing. My bevels were all less than 45 degrees (measured form the top surface), but I was able to do most of the work with a handsaw (rough material removal) and a No. 3 Stanley plane. A little block plane is the best tool to clean things up as you near the final bevel. Procedure is the same as what I've described elsewhere. Plane to the line on both sides, add hash marks, plane away the centre. 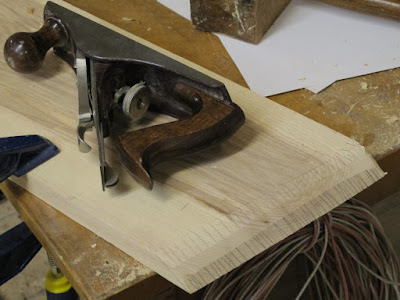 When the first pass on each bevel is done, you need to go back and forth a few times and adjust until the *top* of the seat sits even with the hull marks. After that plane carefully to remove a little bit on aft and forward corners of all seats. This will account for the slight curvature of the hull and close the gap in the centre of each seat. The whole thing will be hidden under a fillet eventually, but it's better for it to fit as tightly as possible. 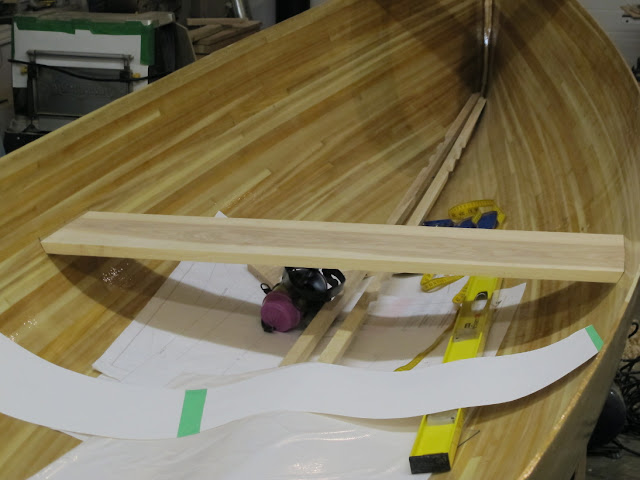 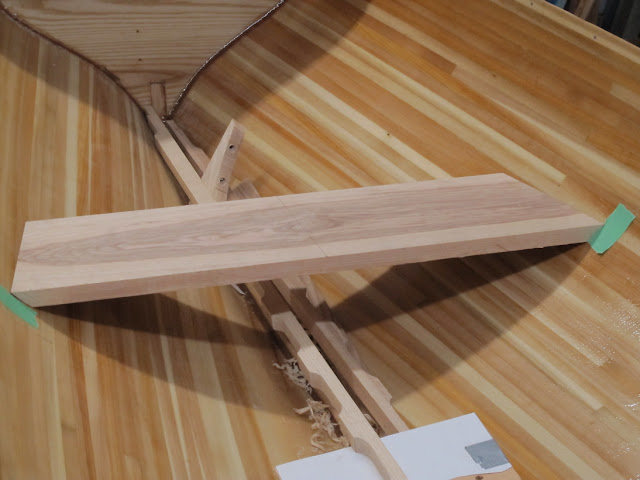 The transom needed a small adjustment. I kind of screwed up way back when I was rabbeting the damn thing (see back posts). Plans call for it to protrude up above the sheer line by 3/8" or so but the rabbet looked dumb there. I also wanted to put a steam-bent cap piece on it so that it has a little lip, rather than just having the plain transom board's edge. This also looked stupid with the messed-up rabbet and there was no good way to add a filler piece to hide my mistakes.

It's hard to describe, but it just wasn't going to work the way it was and the best solution I could come up with was to trim the protruding piece of transom. Not too difficult really -- I made a template on bristol board from the plans, marked inside and out on the transom, then used the same procedure I've described here many times: plane to the line both sides, hash it out in the middle, then plane away the ridge until the hashes disappear.

Final height of the transom looks perfectly fine and I can definitely hide the remaining rabbet screwup with a blob of filleting blend once the cap piece is in place. Not the most elegant solution but it will look fine. 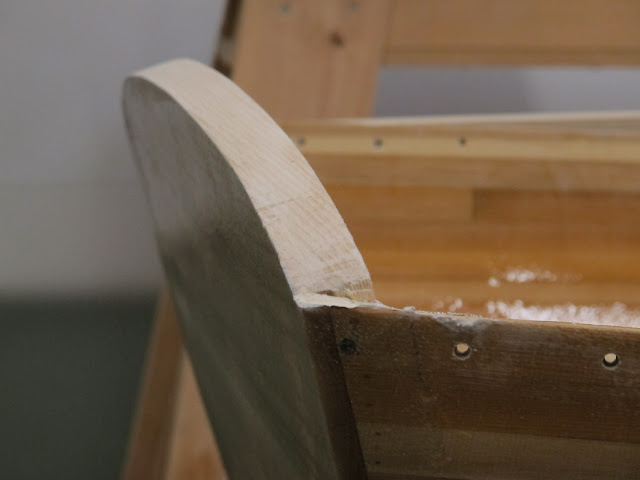 I was all excited to cut the scuppers for some reason. It's a big part of the look in these cedar FRP boats I find. It's also nice to be doing some finish work at last.  First thing of course was to make a template for a 3/8" x 4" scupper. Thank GOD I decided to use the radius of my drum sander bit as the corner radius rather than something smaller. If I had done my rough cuts with a smaller radius it would have been horribly difficult to finish this task. 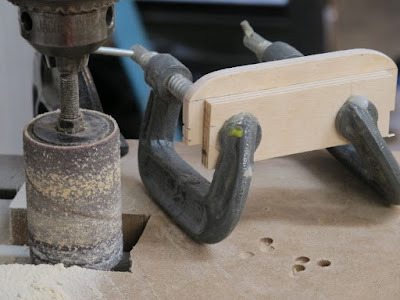 Figure 159: Marked them out on the inner gunwales 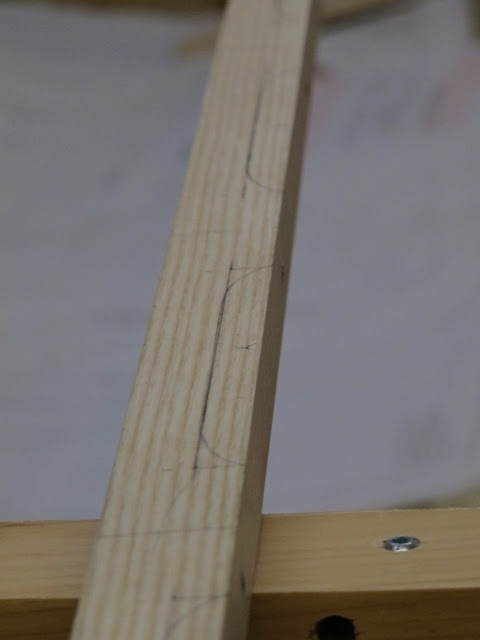 This is where the whole thing got a little grueling. I realized quickly that maneuvering a 20' stick through the bandsaw (ie to rip-cut the scuppers) was a no-go. The only solution was to whack the things out with a chisel. For jobs like this it's *always* best to use a series of cross cuts. The bandsaw is fine for this, but you could easily do it with a handsaw if you cared to. Key is to cut only to the line and not a fraction of an inch farther. Trust me, it will save a lot of work later if you take the 2 extra seconds to be exact on each cut 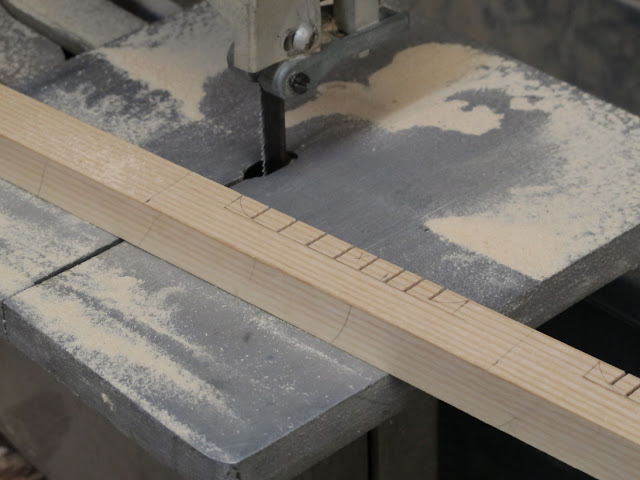 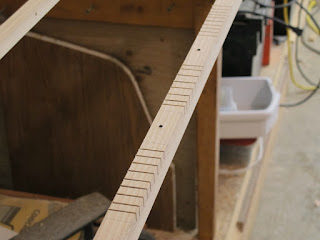 Once the crosscuts are done, it's time to thwack out the little wood nuggets with the chisel. Easiest way I find is to just take your dullest chisel and stick it in one of the saw cuts. Hammer it in with a mallet and give it a good twist. the nuggets will break away at their base (or close to it). Continue breaking away all the nuggets in the scupper and come back afterward with a sharp chisel to clean things up. If you made the cuts carefully, you can continue removing wood until the effects of the saw *aaaalllllmost* diappear. Then you're close enough for a final sanding.

Figure 162: Roughed-out and ready for the drum sander. 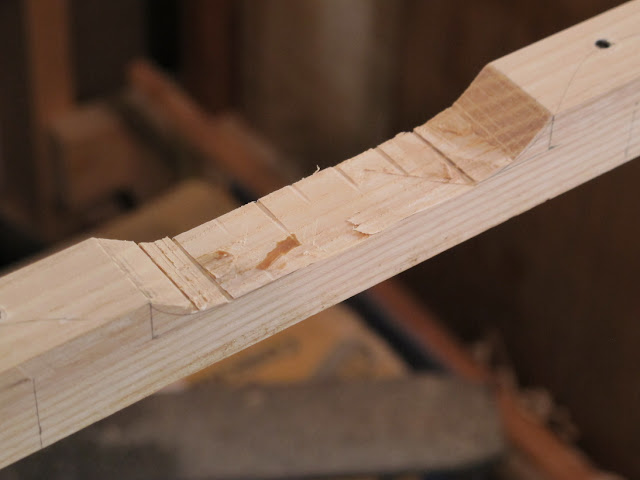 I suspect I'll have time in the next week to complete the sanding. Will edit in a pic of that when I find a few minutes.
Posted by Unknown at 16:34 No comments:

My posts from here on in are going to be mini-posts or amalgams of many short sessions. There is a new baby in the household and it doesn't allow for much more than a one-hour boat building session at a time!

I found a one-hour chunk to mark a waterline on the boat. This is something I could easily have done back during the hull planking stage, but I forgot. Now what??? Lou has the answer!

Using his method, you start by finding where the waterline sits at the bow and stern. On an old boat you can literally float the boat with an occupant and mark it in situ. For a new boat (like mine), just use the plans and mark the DWL front and back.

Next level the hull by placing a spirit level across the gunwales with the hull inverted. Check front and back for level and shim accordingly. Boards are put boards across the stem and stern at the DWL marks and are leveled too. Here I screwed a board to the transom and clamped the other one to my stepladder 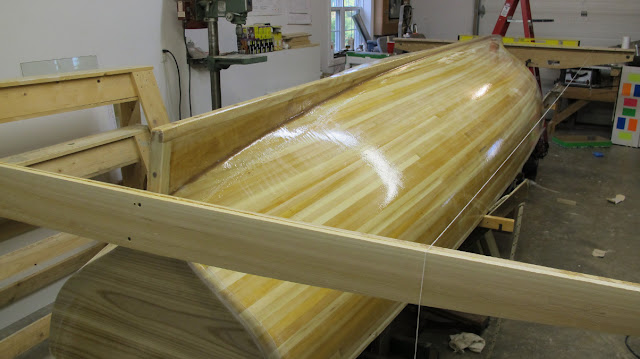 Then take a string and run it from one board to the other. Move one end of the string toward the keel of the boat until it sits about a millimetre above the hull . This is the DWL for that point on the hull.

Continue adjusting the string to get a series of DWL marks along the hull. Connect them with tape and paint a waterline stripe (or just mark it and leave it for now). For the few areas where I couldn't get the string close enough, like under the stern where the hull tucks up sharply, I used a short spirit level to find a point on the hull at the same elevation as the string. This part is slow, but seems as accurate as anything.

If you had a level shop floor you could easily level the stern and stem DWL marks to the floor and make a gauge that references the floor. My shop floor is decidedly UN-level, so the only option was to reference the hull itself. Works either way.