This last session was the culmination of a *lot* of tiny sessions since I had to go on hiatus (because of the new baby). I wanted to get done as many things on the assembly list as possible:
Knowing that we would not get this all done (me and my father + sister) we set to work anyway. First thing was to cut and bevel all of the floors. I deviated pretty heavily from the plans here. They are meant to fit right into the bottom of the hull leaving a small limber hole near the keel. I decided that since these are completely hidden by floorboards anyway, I would just bridge straight across.

Figure 172: Floors, mocked up and ready to go 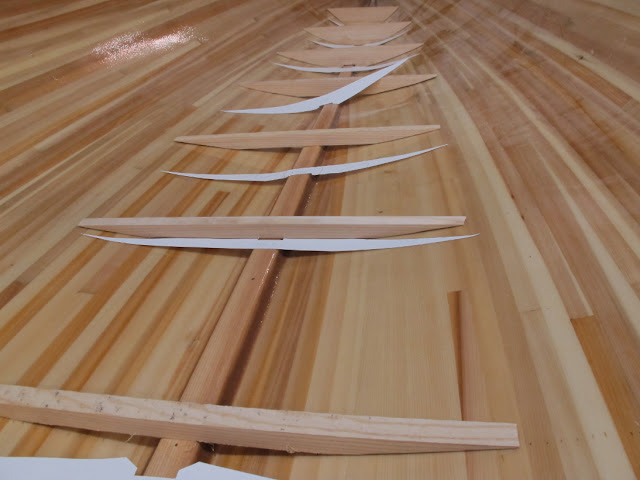 Bridging straight across the top of the inner keel doesn't leave as much contact patch for the glue, nor is it as much support for the floorboards, but I'd rather that than have every little leaf and piece of twine clogging up the 20 or so tiny limber holes when I'm trying to bail the thing out. It was also *much* easier to make them fit this way, considering my templates were a bit, we'll say, "imperfect". You can probably see the fit is poor on some of them -- the bevels in the flatter parts of the hull are extremely hard to match.

I decided to just let the epoxy fill the gaps and hide it all under a fillet later. Gluing was done with epoxy + high-density adhesive filler. Each floor is clamped to the keel with a single screw.

Figure 173: Closeup of a glued floor 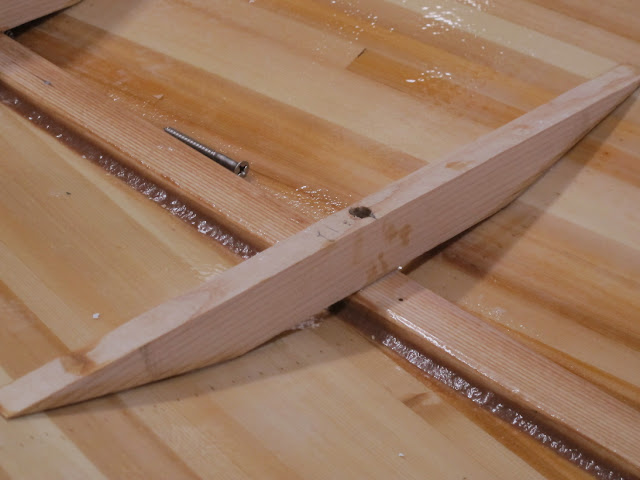 These floors were mounted un-sealed because I wanted to take advantage of the help when I had it. I'll take the time to paint them over with epoxy real good when I do the fillets. We realized once they were all screwed in place that the tips had lifted on a couple of the floors. A few lead weights pushed them into place. 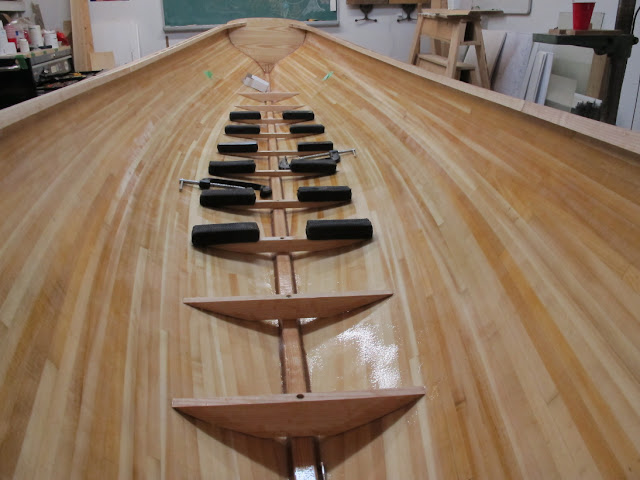 We added some detail to the rowing seats. These had some rough edges form the sawmill and we decided just to add a bevel underneath to cut away the ugly stuff. Once again, plane to the line on both sides, hash it out and plane away the middle.

The risers for the seats were the biggest waste of time all day. We spent about 2 hours fitting them all out and planing away, only to find out that none of them would fit properly when we mocked up the seats after installing the floors. I have no clue what happened there, maybe a slight shifting outward of the hull? I will have to re-do all of them. This will be shown in the next post I imagine. Shouldn't take as long the 2nd time around.

Figure 175: Detail on the seats - slight bevel under 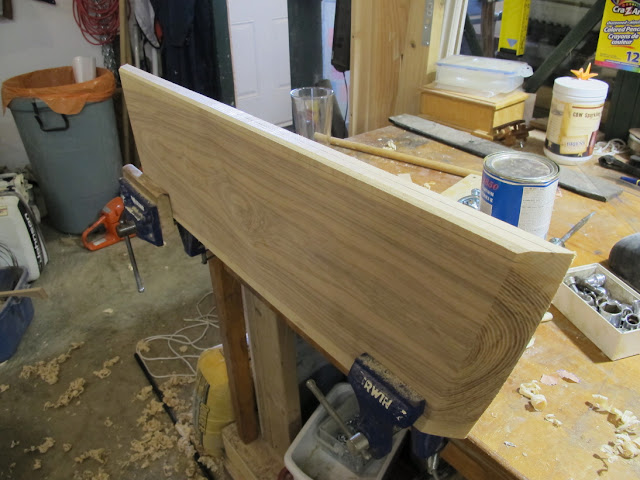 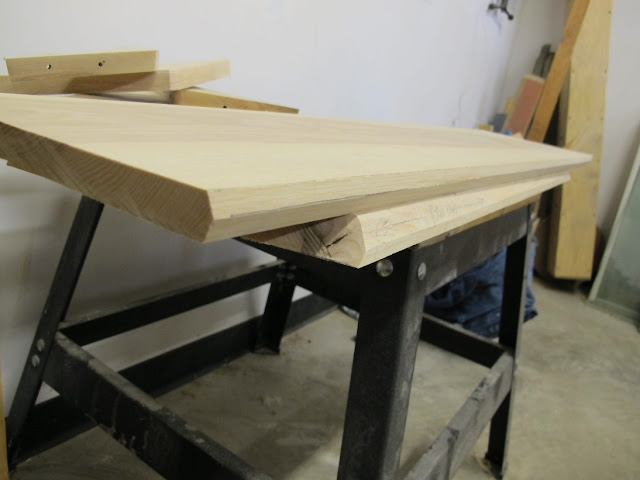 Here is the transom cap that I showed in the last post. Here it is all pre-drilled for screws. I am going to glue and screw this the same as the gunwales and everything else, mostly for continuity of looks. The ends of this proved to be a bit of a pain in the dick....the screws just split the wood as I tried to pull it in. We frigged around with a few things, and in the end found that a wratchet strap does a pretty good job of sucking the cap ends down.

Figure 177: Mocked up and pre-drilled the transom cap 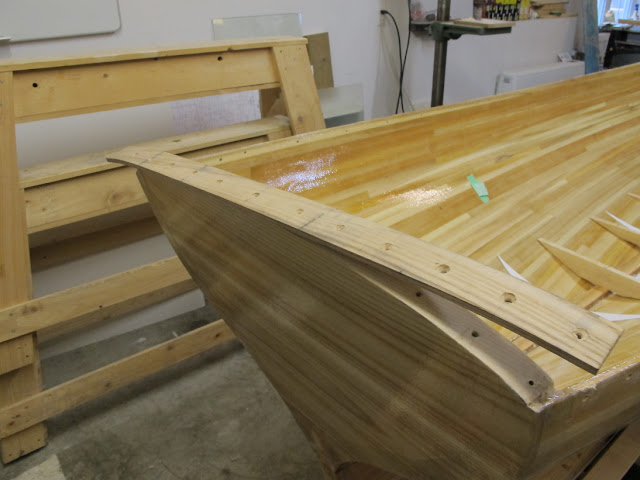 Toward the end of the day we decided to forgo the seat risers and glue the gunwales on instead. I am glad for this choice because the gunwales would have been next-to-impossible to attach without a helping hand. Each set of wales took about 45min to install, which is about exactly the pot life of my epoxy. We added adhesive filler and clamped using screws. Looks pretty damn good with all the parts added on!

Figure 178: Just after the gunwales were added, we set the seats in place to admire the work. 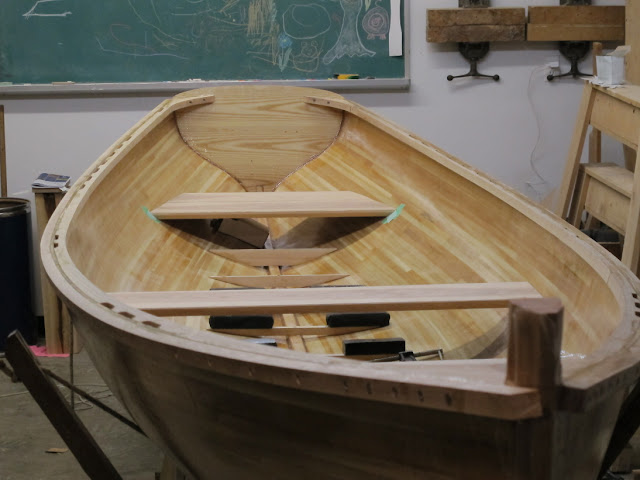 So at the end of the day we got the floors done, seats beveled, knees/breasthook + gunwales attached. The seat risers should take up a session and the transom cap will be a quick job. All in all I'm pretty impressed with the amount we got done.