The boards will be grouped to either side of the centreline. Two boards to starboard, and two boards to port. Each group will be tied together to maintain a gap. Some kind of removable hold-down will have to go in place eventually since they do not sit flat, but

Floorboards are proving to be a bit of a pain. It all started out pretty good -- I made up a template for the bow out of bristol board and laid out the centre boards. I traced the narrowing of the bow on the boards and cut off the offending wood. A notch was cut for each seat support and to ensure that the floorboards sit in the proper position. This is when I realized my boards had a serious curve, despite having been clamped against a straightedge.


Figure 197: Bristol board template of the bow 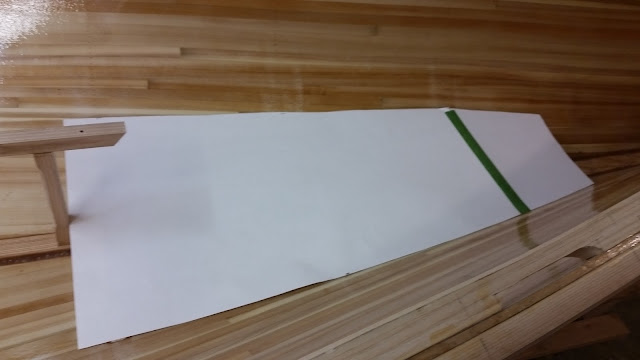 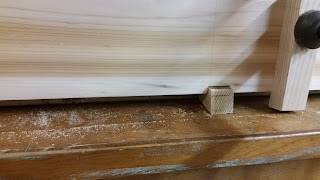 I probably should have checked for straightness beforehand, but it's far too late now. No worries though - it's a chance to finally try out the hand ripsaw I bought last year. Ripsaws look a lot like crosscut saws except the cutting side of the teeth is about 90deg to the blade instead of 60deg. The teeth are also much deeper and not so close-set. I suspect this is because they are meant to act like a hundred little chisels, shaving wood out of the grainwise kerf rather than snipping across grains in a cross-cut situation.

I snapped a chalkline and cut it straight. Used my No.5 stanley plane to clean up the tooth marks. Checked later with a straightedge and it came out pretty good. Fitting against the other floorboard, you can barely even see gaps. 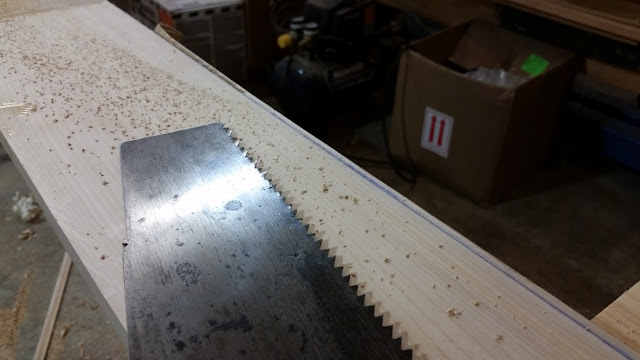 After getting the two centre floorboards figured out, I started on the outer ones. Again, I cut a straightedge for reference. For the other side, I just measured the floor pieces that were sticking out past the centre floorboards. These were marked on the outer floorboard and I splined them with a batten. On the upper side of the board I added 3/8" so that the board edge would have a slight bevel and hide the ugly fillets on the floors.

Using the floors to estimate the spline might have been a mistake. It makes for a funny swoop in the board toward the stern; the board edge doesn't quite follow the curvature of the hull. At this point I don't really care and the floorboards are replaceable anyway. Maybe I'll figure something different out when I eventually replace them. 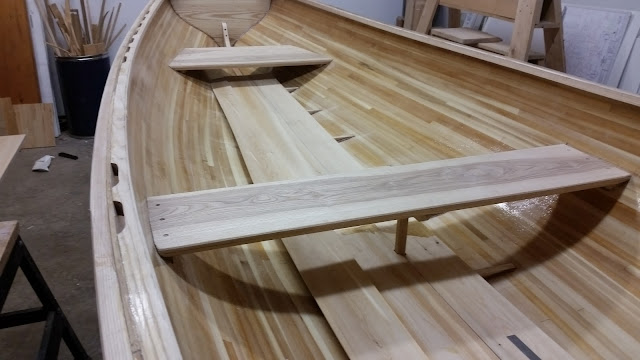 Figure 201: Starboard side outer floorboard, looking aft from the bow. 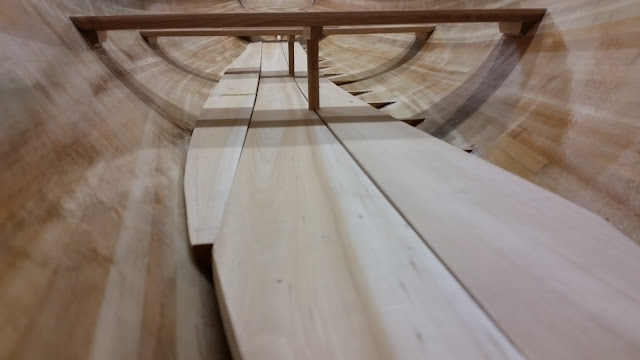 I think it's looking pretty nice with those floor pieces covered up finally. Last thing will be to make the little cross members that tie the floorboards all together and then it's on to final finish work!
Posted by Unknown at 11:21