Here's a quick overview of the trim pieces I added after final assembly. First thing was a rub-strip along the outside of the stem and keel. These are high-wear areas and a rub-strip is the best way to prevent damage to the fragile fiberglass + epoxy moisture barrier. I decided to glue this on rather than screw it (for waterproofness), figuring I could just sand it and replace sections as needed when it wears. The strip is unfinished white oak, 1/4" thick and it runs the entire length of the keel. 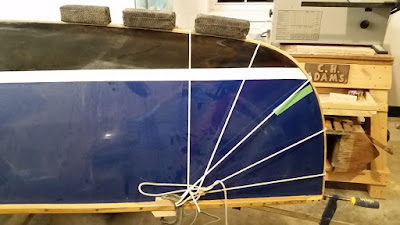 For hardware, I added a stainless loop at the waterline for towing and hauling on to the trailer, and then added bow/stern cleats for tying up to the dock. I didn't go for anything too fancy here -- they are just standard SS bits from the local boat supply shop. 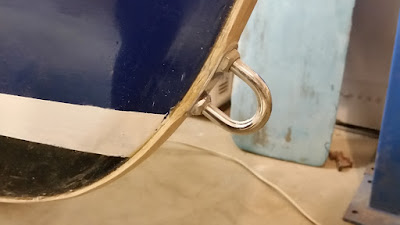 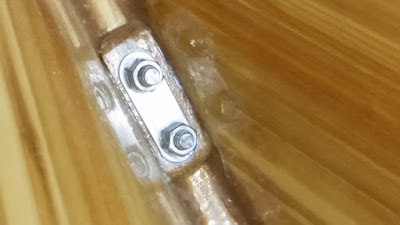 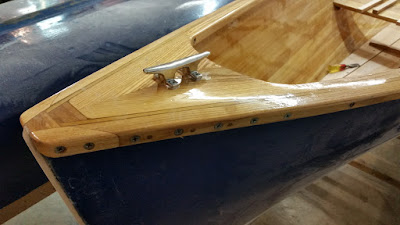 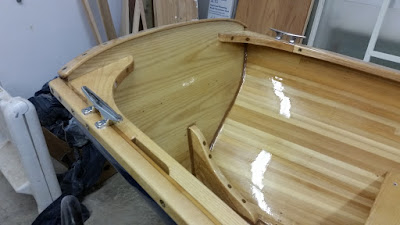 I added a protective coat to my oars (4 of them actually) with the same epifanes varnish used elsewhere on the boat. This gave them a nice protective shell. My plan is to re-varnish these at least once a year until I get a nice invincible coat built up. Before Varnishing, I also added some cross-grain blade ends to my culler oars using some leftover white oak. The spruce on these oars is far too delicate to be left unprotected, and it looks nice.

Figure 256: Oars with their 1st coat of varnish 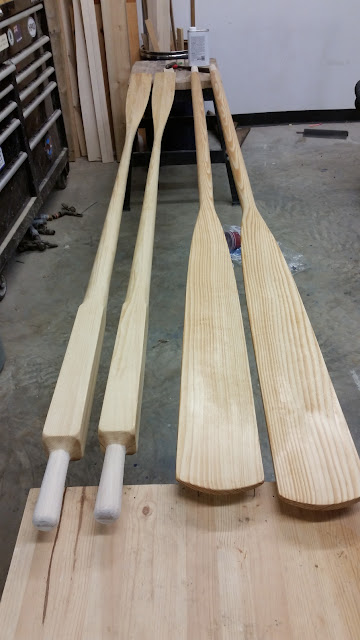 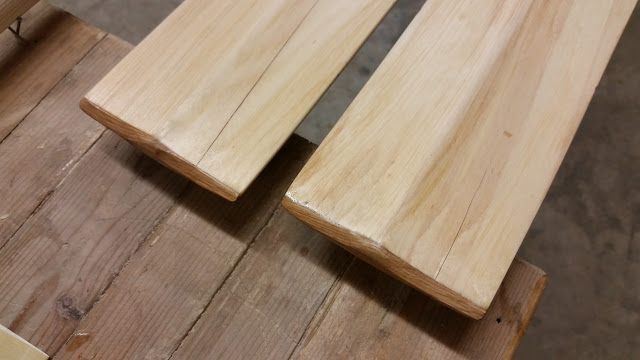 The trailer construction was a bit of a saga. I went and found an old flat-deck trailer in my buddy's barn and paid him $300 for it. All in, the damn thing probably cost me as much as a new trailer to fix up. I had to:


In the end, my 'cheap' trailer looks pretty cool and works well enough until I can save up for a proper rig.

Figure 258: Trailer as it was when I got it inspected 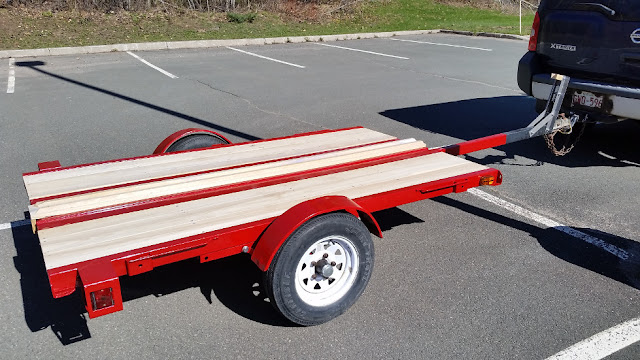 Figure 259: Trailer with the boat on top just before I built the bilge bunks. Canadian tire finally put the boat sundries out on the shelf and I picked up a tube of 3M 4200 sealant. This was used as an adhesive/sealant in the screw holes, and on the mating faces of the seat supports & hull blocks. These joints all could have been epoxied obviously, but I wanted them to be non-permanent in case I need to replace a seat or otherwise modify the bottom of the boat.

So yeah. Pretty much DONE at this point. All that's left is the rub strip for the keel and a few cleats fore and aft. Probably going to add a tow loop down on the stem near the waterline as well to make it easier to haul the thing up onto a trailer. Check it out!

Figure 246: The standard view off the starboard bow 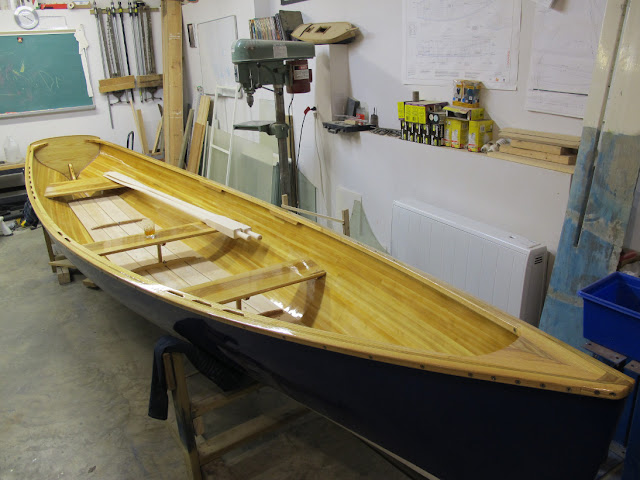 Figure 247: A bit lower perspective that better emphasizes the curves 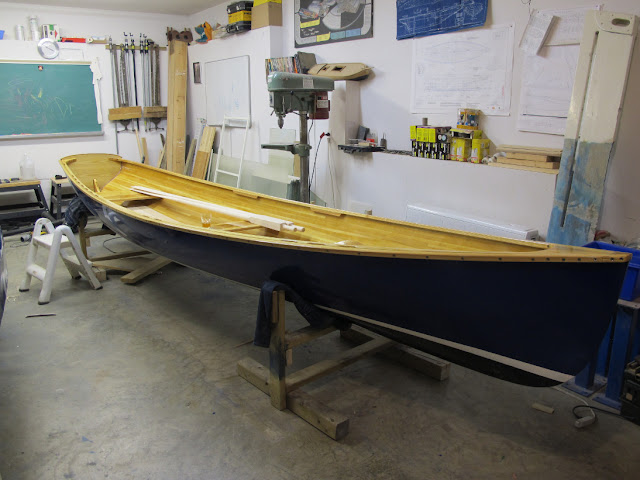 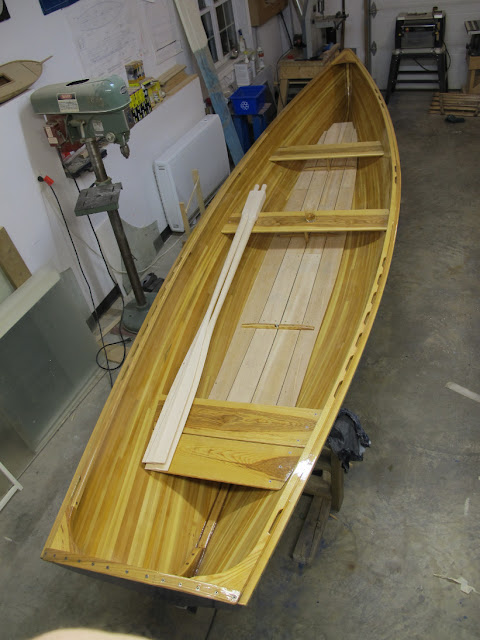 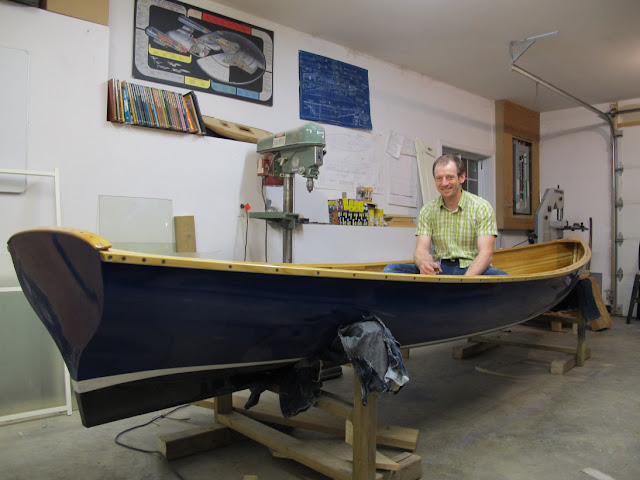 Figure 250: The happy builder & his wife who is lovelier than the boat. 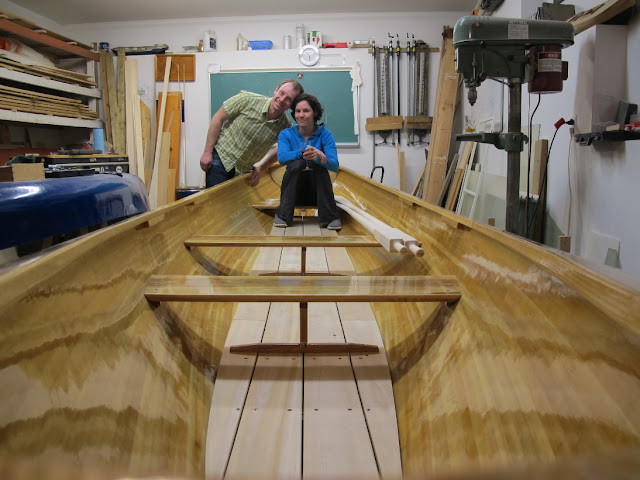 
Just a quick update today showing progress on painting. Now that I've finished varnishing the inside and gunwales (thank god) it was time for a final coat on the outside. It's been a couple of months since the first layers of blue went on and that stuff is all cured up now. It's important not to layer up too much easypoxy in one go. 1 or 2 coats max and then leave it for awhile. If you layer too thickly without leaving time for a full hardening, then it seems to go rubbery and takes forever to dry. 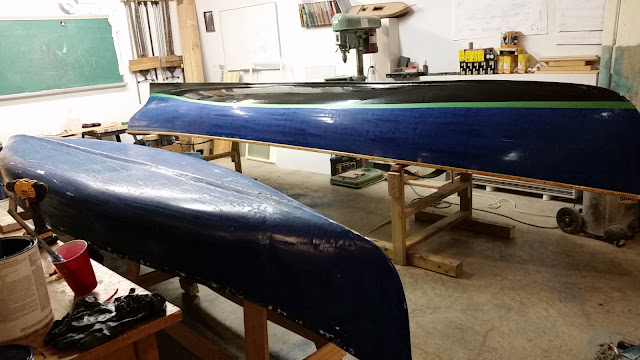 Next, I taped off above the waterline with 1-1/4" masking tape. This leaves a gap between the graphite epoxy bottom coat and the gloss blue to accommodate the waterline stripe. This was followed by a new layer of blue. You can see my old fiberglass canoe here too -- it's in need of some serious TLC, paint being a part of that, so I painted it at the same time. Tape was removed shortly after; it's a good idea to do this just after the paint tacks up, but before it hardens completely.

After letting the blue cure for 2 days, I came back and taped off the waterline stripe. This received 2 coats of easypoxy gloss white. With tape removed, the finished waterline stripe looks pretty damn good I think.

Figure 244: Gloss blue coat all dry, with waterline above just prior to tape removal 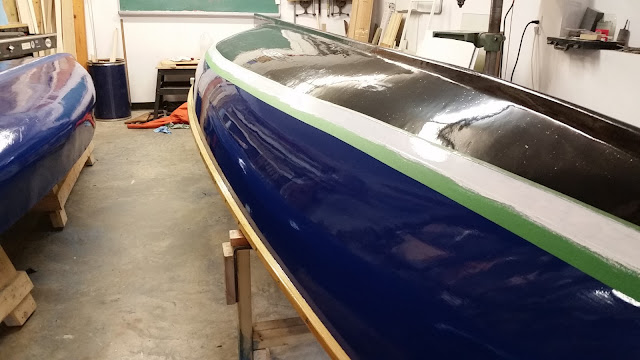 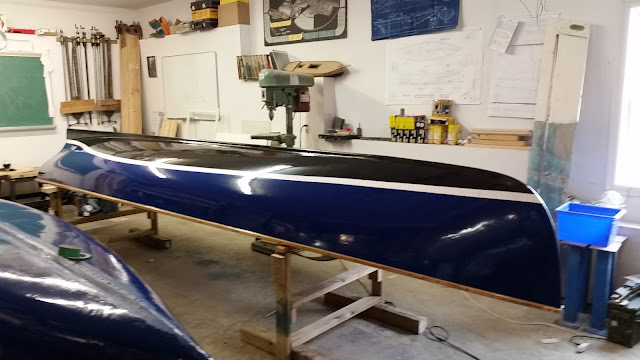 And here demonstrates the need to let the first coat dry overnight before applying the second. I did 2 coats in pretty rapid succession with the white to hide the blue underneath. the paint job looks good, but it is still rubbery 3 days later. It'll cure eventually, but will take longer than if I had done it properly.

Not a big deal anyway, the boat needs to stay upside down while I fabricate and install the rub strip on the keel. More on that next time!
Posted by Unknown at 12:45 No comments: